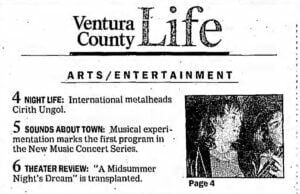 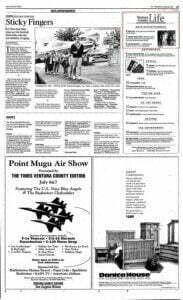 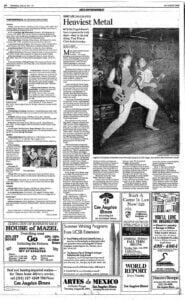 NIGHT LIFE THE CLUB SCENE
Heaviest Metal : Cirith Ungol doesn’t have to pose to be rock stars–they’re the real thing. They’ll be at Club Soda Monday.
June 20, 1991|BILL LOCEY | SPECIAL TO THE TIMES

Most band members dream of rock ‘n’ roll stardom–salivating groupies, truck convoys full of fan letters, Kim Basinger’s cuter sister as your personal bodyguard and spiritual adviser, other famous rockers playing in your band, every kid in America wanting to be you.

But dreaming is about as close as most musicians ever get to rock ‘n’ roll stardom, despite the fact that many at least look like rock stars. That’s because most rock bands have no talent, no hits, no connections, no friends, no fans, no tans.

Local metalheads Cirith Ungol are no rock god poseurs, and they are popular. Not so much in their hometown of Ventura, but in the world over, and especially in Europe, these guys are big time. They still average about 100 fan letters per week.

“I just took 10 boxes of letters to my parents’ house,” said drummer and founding member Rob Garven in a recent interview at the band’s practice site.

Most are from Europe and crawl with agreeable adjectives from adoring fans. Girls send pictures. Everybody seems to want stickers, photos, autographs or info on new Cirith Ungol music.

These people worship a band that hasn’t released a record since 1987, but now Cirith Ungol has a deal. They’re signed with Restless Records, who will soon release the band’s fourth full-length album. That’s right–fourth. So now there are two bands with deals in the 805 area code, Santa Barbara’s Toad the Wet Sprocket and these self-proclaimed Masters of Metal, whose motto is “In Metal We Trust.”

Cirith Ungol’s first album came out in 1981. The band has played nearly everywhere that’s anywhere in Southern California, yet not so much in their own hometown, although that’s likely to change in the near future. The band has headlined the Roxy, the Beverly Theatre, the Whiskey and the Country Club. Monday you can catch them at Club Soda in Ventura.

“We practice three nights a week,” said Garven, “and we’re going to start playing more. Basically, we’re waiting for our new album to come out–it’s due in September. We have a record label that seems very committed. We sell a lot of albums everywhere but here. Maybe familiarity breeds contempt, I don’t know.”

Part of the problem is with heavy metal itself. There is a certain stigma attached to the genre. Critics routinely ridicule metal as endless, mindless and senseless, sort of the Al Bundy of rock ‘n’ roll getting even less respect than Rodney Dangerfield on a bad day. The end of metal is imminent, they say. Wrong again. Metal has not only not gone away, but is more popular than ever.

“Deep Purple and the Scorpions are still playing, and they’ve been around a lot longer than we have,” said Garven. “Heavy metal is an art form, not just entertainment. We’re trying to create something here art-wise. We do original, straight-ahead metal.”

Cirith Ungol also does it loud. They have speakers as big as an old Chrysler and in Baker a singer who can shriek with the best of them, seemingly inflicting grievous damage on his throat with every song. It’s enough of a sonic assault to work Mother Teresa into a frenzy sufficient to consider doing a drive-by at Mr. Rogers’ house.

The songs incorporate typical metal themes–death, doom and destruction with sword and sorcery overtones. In fact, the covers of all the band’s albums are paintings by award-winning sci-fi artist Michael Whelan.

Rock ‘n’ roll often takes the listener to some strange and wonderful places–Strawberry Fields, the sunny side of the street, the dark side of the moon.

Cirith Ungol is not one of those places. It’s a good place to be from, especially away from. All diligent J.R.R. Tolkien readers will recall Cirith Ungol as the scary castle in the land of Mordor, where all the bad guys live. Club Soda is much closer.

* Still more on the subject of tapes, more or less. Ventura County metalheads Cirith Ungol and their label, Restless, were recently divorced. The band is currently seeking a European distribution deal.

ROCK TALK : Sorry, Charlie’s : The venerable rock venue is being sued over noise by its neighbor, the Ventura Holiday Inn.
BY BILL LOCEY
NOV. 7, 1991 12 AM PT

New releases are available from Lion I’s, Sinister Fisch, Cirith Ungol, Rogue Cheddar, Ariel, the Handsome Devils and the last-ever Toast tape. The Mudheads’ tape is still imminent and even Raging Arb & the Redheads are threatening.

MUSIC EEK-A-MOUSE : Reggae Rodent : Singer from Jamaica with a strange name– and a strange voice– will bring a little music to Santa Barbara.
BY BILL LOCEY
SEPT. 5, 1991 12 AM PT

. . . .
* Two more Santa Barbara bands recently got signed–Ugly Kid Joe and A Band Called Horse. They join fellow Santa Barbarians, Toad the Wet Sprocket, who recently had a CD-release party for their third effort. In Ventura, Cirith Ungol is signed and a new one is imminent on Restless Records. And Ill Repute from Hueneme has half a dozen records. Elsewhere throughout the 805 area code, hordes of bands are hoping . . . . 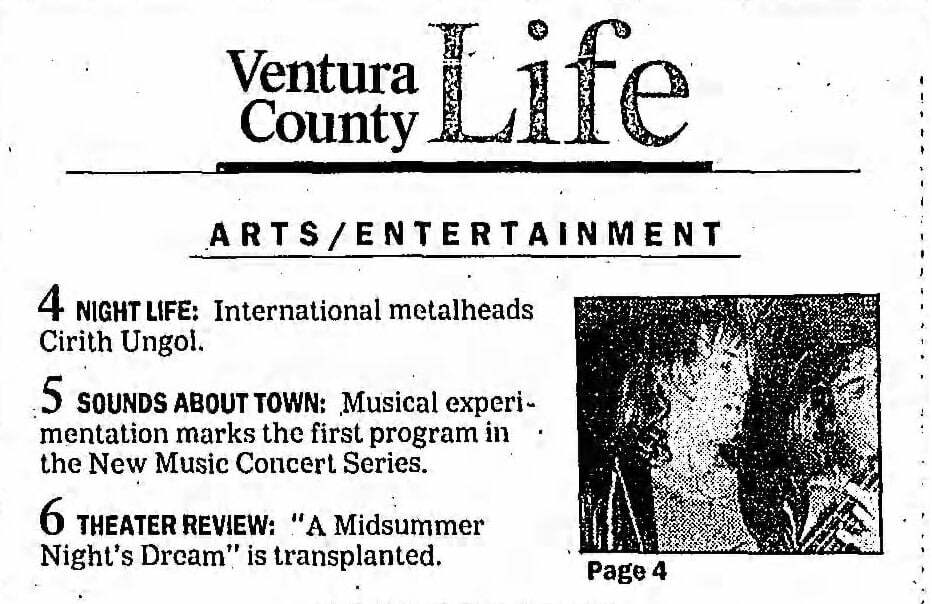