Assedium was an Italian metal band formed in 2004. They have covered Cirith Ungol.

Cirith Ungol, long ago, showed me the way of music I love: to tribute them is a duty and honour, and Black Machine is the song that suits my guitar playing the best. Besides, everyone today is riding the black machine of decadence…

One of the songs that synthesizers better the essence of Cirith Ungol’s style. A place of psych-epic history.

Women look like the Black Machine ….fill your head with evil dreams…

What are your relations to Black Machine?

The same relations with every song off King Of The Dead: pure and unconditioned worship. It’s my favorite album from my favorite band: every second in it beats basically everything for me. I really can’t describe the exact feeling that song gives me, but know that it’s been almost 20 years since I have first heard it, and still, when Jerry Fogle’s first solo kicks in, I get goosebumps and shivers down my spine.

I’m gonna be 100% honest here: because we were young and unexperienced and Black Machine looked easier to me than most C. U. songs, ahahah! I mean, it’s still impossible to obtain the same magic C. U. created, but to the twenty year old me it looked like “come on, it’s just 2 riffs, we can make it!”

After a couple of years of rehearsals and practice I would have chosen one between Master Of The Pit, Finger Of Scorn or War Eternal, but back then we simply lacked the skill to play those tunes. All that mattered to me was to play a cover of my favorite band. When I was 18 or so only Doomsword, Battle Ram and Holy recorded Cirith Ungol covers (if I remember correctly), and I remember thinking stuff like “what the fuck, every HM band in the world should do their part to remember the greatest cult band of all times, how come it’s just three bands from Italy!”

So, when I finally managed to be in a HM band with like-minded guys, it felt really mandatory to do our part. It was a matter of honoring a legend, you know? We never expected Cirith Ungol to come back to show us how it was done. And of course, after so many years, I am glad they did!

Have you been doing a live version of Black Machine?

Yep, but only with our first singer Marco. We only recorded our demo “Far From The Light” with him, and “Black Machine” was probably the best thing he did there: he had a shrieking, strange kind of voice which happened to suit Cirith Ungol quite well! When he called it quits in 2006 we took Luca ‘Fils’ Cicero on board, with whom we recorded our 2 full-length albums. He was an improvement in every way possible for us, but his voice was really not fit for Cirith Ungol, so we had no choice but to stop playing that song. Anyway, we were writing tons of new material back then, so cover tunes were not as important as in the very first days.

After many years though, in 2012 I think, I happened to play “Black Machine” live as a guest with Greek Cirith Ungol cover band “Finger Of Scorn”, with members of Convixion, Battleroar and Dexter Ward. It happened at Up The Hammers festival, in Athens, and I was there to play with my other band Axevyper. Manolis Karazeris (the festival organizer, plus guitarist for Dexter Ward and Finger Of Scorn) asked me if I want to join the tribute on warm-up show just for that song, remembering how I covered it 8 years before. I remember it came out quite well, and believe me, that is the best place in the world to play a Cirith Ungol tune!

Have you played any more of Cirith Ungol, except for that one song on that one gig, or any plans?

It’s an instrumental medley, mainly for guitar players I think, but I remember getting a lot of positive reactions out of it. No plans for future covers since I am not playing with anyone right now.

Can you tell me the biography of Assedium from 2000s until now?

Well, our life as a band was quite short so it’s easy: me and Drake (the bass player) met through an announcement on the internet. We both wanted to play raw, uncompromising epic heavy metal in the vein of Manilla Road, Omen, Cirith Ungol (of course!), Warlord, Medieval Steel and so on. We formed the band in 2003 with Chicco on guitars, Damien on drums and Marco on vocals. We recorded a demo in 2004 and made it to the first Cirith Ungol tribute album. We signed a deal with the newborn label My Graveyard Productions then Marco was out, Luca was in and we joined the very first edition of Up The Hammers festival, Athens, 2006. We made two albums, played a lot of shows in Italy, some in Greece and Germany and then we split in 2009. We had a good run, lots of fun, shitloads of beer and had the chance to play with many of our heroes. That’s about as good as it gets in underground metal. After the end of Assedium me and Luca formed Axevyper, but that’s another story.

Support the artists, buy records or merchandise of Assedium Far from the Light 🛒
These links are automatic generated links and may not always give the best search result. Sometimes you might need to refine the search after having tried any of these links. Some are affiliates and some are not. If you know about any good deal for Black Machine, don't hesitate to add a link in the comment field or in the forum.
Categories:
0 0 votes
Article Rating
Subscribe
Connect withD
Login
Connect withD
0 Comments
Inline Feedbacks
View all comments 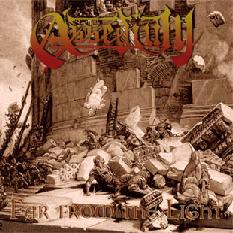