A Cirith Ungol song from about 1975 never released.

He [Neil Beattie, CU’s first vocalist] was a little more glam inspired than the rest of us, but he put on a really wild live show, with black widow spider fingertip extensions to go along with our six foot wide black widow spider for “Shelob’s Lair”.

Cirith Ungol has re-recorded this song in 2020.

Shelob was an “evil thing in spider-form…[the] last child of Ungoliant to trouble the unhappy world”, living high in the Ephel Dúath mountains on the borders of Mordor. There are numerous references to her predating the events of The Lord of the Rings by many ages. Although she resided in Mordor and was unrepentantly evil, she was independent of Sauron and his influence.

This creature makes her first appearance in the chapter “The Stairs of Cirith Ungol”, though she is formally introduced in the next chapter “Shelob’s Lair” (Elvish Shelob’s Lair) where the author says “But still she was there, who was there before Sauron, and before the first stone of Barad-dûr; and she served none but herself, drinking the blood of Elves and Men, bloated and grown fat with endless brooding on her feasts, weaving webs of shadow; for all living things were her food, and her vomit darkness”. Her descendants include the Giant Spiders defeated by Bilbo Baggins in The Hobbit.

Shelob’s lair was Torech Ungol, below Cirith Ungol (“Pass of the Spider”), along the path that Sam Gamgee and Frodo Baggins took into Mordor, where Shelob had encountered Gollum during his previous trip to Mordor, and he apparently worshipped her. The Orcs of the Tower of Cirith Ungol called her “Shelob the Great” and “Her Ladyship”, and referred to Gollum as “Her Sneak”. Sauron himself was aware of her existence, but left her alone, as a useful guard on the pass, and occasionally fed prisoners to her. In the story, Gollum led the Hobbits into her lair to himself recover the One Ring after she consumed them. She cornered them; but Frodo used the Phial of Galadriel’s light to drive her off, and used Sting to cut the webs blocking the tunnel. Gollum waylaid the pair and tried to strangle Sam, while Shelob paralysed Frodo; whereafter Sam fought off Gollum and then wielded Sting against Shelob. Seeking to crush Sam, she instead impaled herself upon Sting; and was nearly blinded by the Phial of Galadriel; whereupon she fled. Thinking Frodo dead, Sam took the Ring from his friend and left his body behind, but discovered by listening to a pair of Orcs that Frodo was alive but senseless, under a minor influence of venom.

As Tolkien admitted in a letter to his son, Shelob “is of course only ‘she + lob‘“, lob being an archaic English word for spider, influenced by Old English loppe or “spider”. The word is not related to “cob” nor “cobweb”. Old English attercoppe (meaning “spider”) is derived from atter meaning “poison” and coppe meaning “head”; Tolkien used “attercop” as well as “cob” and “lob” in The Hobbit, where Bilbo Baggins sings songs taunting the giant spiders in Mirkwood: “Attercop, Attercop, Old Tomnoddy” and “Lazy Lob and Crazy Cob”. Wikipedia.

Support the artists, buy records or merchandise of Cirith Ungol Half Past Human 🛒


Lord of the Rings (Amazon)

These links are automatic generated links and may not always give the best search result. Sometimes you might need to refine the search after having tried any of these links. Some are affiliates and some are not. If you know about any good deal for Shelob’s Lair, don't hesitate to add a link in the comment field or in the forum.
Categories:
0 0 votes
Article Rating
Subscribe
Connect withD
Login
Connect withD
0 Comments
Inline Feedbacks
View all comments 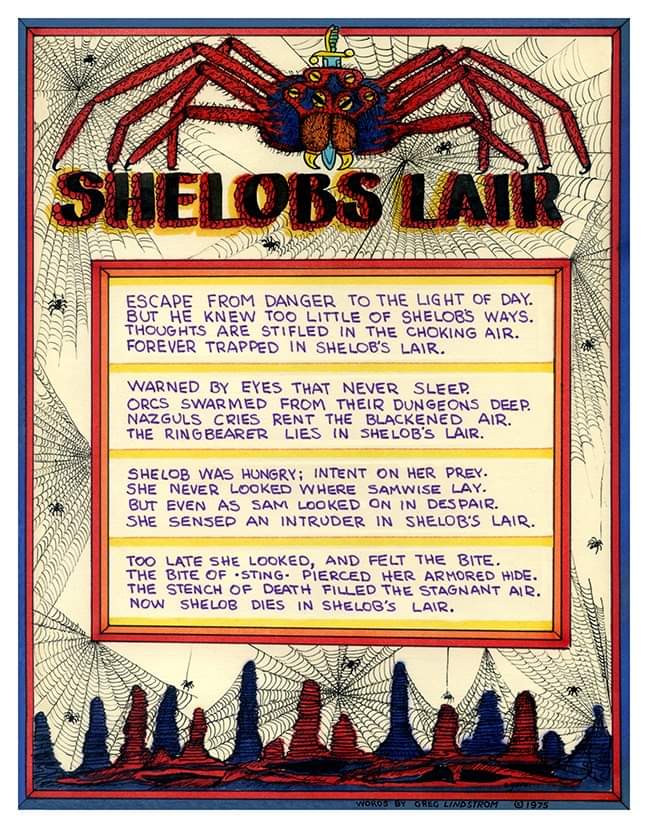