Listen to the full show and follow on Mixcloud!

Few bands in the history of the heavy metal underground have a story as remarkable, improbable, or uplifting as that of Cirith Ungol . It is a tale of pioneering innovation, crushing disappointment, self-imposed exile, populist fervor, and, ultimately, global redemption.

The band was formed in Ventura, California, in the early 1970s, long before the rigid tropes and ironclad traditions that define today’s heavy metal genre had taken shape. There was no rulebook, no template to follow, so Cirith Ungol simply made it up as they went along, allowing their imaginations to run amok and their creativity to be their guide.

Cirith Ungol first appeared on the scene with their self-financed debut album, Frost and Fire , via their own Liquid Flame Records imprint in April 1981. It was obscure and arcane, mysterious and eccentric, epic and expansive, but most of all unfailingly, bone-crushingly heavy, dark and doom-filled. Cirith Ungol ‘s lyrical approach was profoundly influenced by the high fantasy literature of J.R.R. Tolkien (from whose Lord of the Rings opus they derived their name) and Michael Moorcock. For the cover artwork, the band contacted acclaimed fantasy artist Michael Whelan, who allowed them to use his painting “Stormbringer,” which also graced the cover of the DAW Books edition of Moorcock’s novel of the same name. This artwork created the perfect visual accompaniment for Frost and Fire , and forged a lifelong friendship and collaboration between artist and band that persists to this day.

Cirith Ungol went on to release two additional studio albums – King of the Dead and One Foot in Hell – now regarded as stone-cold classics. However, by the early 1990s, the musical climate was shifting away from traditional metal. The band was plagued with lineup instability and then came an unsatisfying studio experience during the recording of the 4th full-length album, Paradise Lost , that left them profoundly disappointed. Finally, after years of frustration took their toll, Cirith Ungol was laid to rest in May 1992.

As the years passed, a faint, almost imperceptible drumbeat began to sound in Europe. The band’s diehard fanbase across the Atlantic never forgot about the kings of the dead or abandoned the dream of seeing them live. The fervent clamor for Cirith Ungol ‘s return would not be silenced. Then, in late 2015, after intense deliberation, the sleeping giant awakened. The quartet of drummer Robert Garven, vocalist Tim Baker, and guitarists Greg Lindstrom and Jim Barraza began to knock the rust off and rediscover the magic. It was still there. With Flint unavailable to rejoin them on bass, Cirith Ungol recruited Night Demon bassist Jarvis Leatherby to fill that slot. As a seasoned musician, lifelong fan, and one of the driving forces to reanimate Cirith Ungol , Leatherby was the logical choice.

On October 8, 2016, Cirith Ungol officially returned to the stage by headlining the Frost and Fire II festival at the Majestic Ventura Theater, playing to a packed house of metal fans and friends who had converged on the band’s hometown of Ventura, California to witness the kings of the dead rise from the grave. This night was vindication. In Garven’s words, ” When the ancient stars aligned, Cirith Ungol crawled out of its ancient slumber, to wreak havoc on an unsuspecting world. ” Two days later, fresh off their Frost and Fire triumph, the band were honored by the City of Ventura, which declared October 10, 2016 to be Cirith Ungol Day .

In the ensuing years, Cirith Ungol have held fast to their objective to bring their music to as many fans around the world as possible, performing select high-profile festival gigs spanning North America, Europe and South America. At this juncture, every Cirith Ungol show is special, with audiences flocking from around the globe to see them. So it was only proper that the band unveiled their first official concert recording, an expansive double-live album, multi-DVD package and box set entitled I’m Alive , via Metal Blade Records in October 2019. Capturing them at the peak of their darkened, mystical powers before rapturous crowds in Greece and Germany, I’m Alive showcases the magick and might of Cirith Ungol onstage.

Now, as the Cirith Ungol resurrection enters its fifth year, the band proudly presents Forever Black , Cirith Ungol ‘s first collection of all-new material in 29 years! Fittingly, the street date of April 24, 2020 coincides with the band’s historic double-headliner appearance at the Keep It True Festival in Germany. Make no mistake: Forever Black is a classic Cirith Ungol album in every sense of the word. The trademark dark and foreboding riffs, pounding rhythms, and soul-searing vocal attack are instantly recognizable as the Kings of the Dead. From a songwriting standpoint, Forever Black touches on all of the elements that make Cirith Ungol revered, from the exhilarating uptempo call to arms that is “Legions Arise” to the clever incorporation of past glories in “The Frost Monstreme” to the somber and dynamic “Stormbringer” to the primal chest-beating epic finale of the title track. Lyrically, Forever Black explores topics ranging from high fantasy themes to rallying cries for the legions to apocalyptic visions of burning fires, incarnate evil and jet- black darkness. The icing on the cake is the striking cover painting by Michael Whelan, whose magnificent visuals remain inextricably associated with Cirith Ungol .

Simply put, Forever Black is a testament to Cirith Ungol ‘s continuing vitality and enduring primacy in the classic metal pantheon, more than four decades after the band’s inception. It is a gift to the steadfast and growing legions of fans, old and new, who never faltered in their belief, who coaxed them out of retirement, and who have embraced them during the reunion years. It is a continuation of the Cirith Ungol mythology, a worthy and welcome addition to their daunting musical legacy. And it is a defiant fist to the face of any unbelievers who doubted Cirith Ungol ‘s unshakable resolve and burning dedication to their arcane and mysterious craft.

As Robert Garven is fond of saying, Cirith Ungol remains ” A Churning Maelstrom of Metal Chaos Descending! ” Long may they reign! 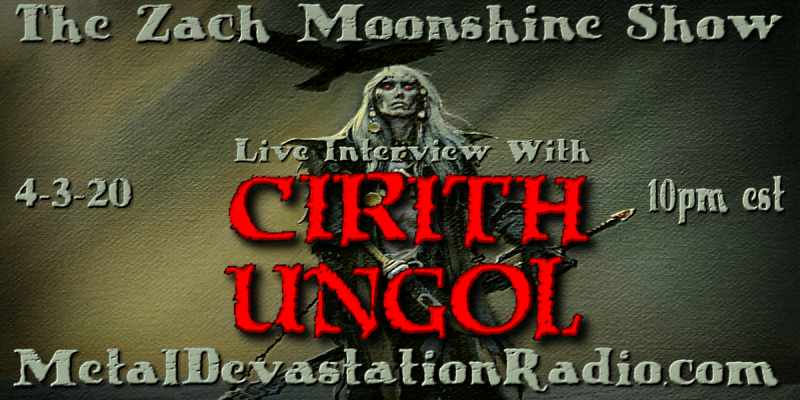