Michael Johnson was the ninth Cirith Ungol member, or eleventh if you count Bob Warrenburg and Joe Malatesta. He replaced Jimmy for a short time at the very end of their career. He didn’t play any gigs, but he appears in the video for Join the Legion and rehearsed with the band. Michael Johnson has also played in multiple other bands and created soundtrack for several video games.

I was the guitar player for CU for a short time after Jimmy’s departure. Vern and I were good friends and working on a band project together when he asked me if I would be interested in joining the band. They had just finished the Paradise lost album at that point. I was very excited to join the project since I was pretty familiar with the band. We rehearsed a few times and did the Join the Legion video and things pretty much fell apart after that. Very unfortunate of course I would have loved to keep working with the band. You asked if I still listen to them and the funny thing is that I have the “Paradise Lost” CD in my car as I write this! As I said it was a short experience, but a great one. Everyone was very talented and extremely professional that is something I very much enjoyed. If would definitely join them any day if they needed a guitar player. Prior to Cirith Ungol and moving to Los Angeles I was in Europe where I grew up (in France about 10 minutes to the German border, town called Strasbourg). I played in numerous metal bands while growing up, the most famous one being Mystery Blue. After moving to Los Angeles in 1990, I was involved with many band projects but it was the worst timing possible for Metal as Grunge/Alternative was getting trendy. I spent most of that time between 1993-1997 writing  a lot of instrumental music for video games. Some of the most famous ones being “Future Shock” which was featured on the Terminator game for Sega CD and won an award in Las Vegas for best video game music of the year. Also played on the original Playstation Demo CD that came with the console which millions of people heard, that was a great feeling. After that period I really wanted to get back on stage which is my favorite. Joined an AC/DC tribute band called OC/DC, didn’t play with them very long I needed something with more guitar shredding so I formed a Megadeth tribute band called “Hangar 18” with singer/guitar player William Rustrum. The band was very well received and we played for quite a few years. We were invited to open for Danzig in Las Vegas and also headlined a the Borderland Metlfest in El Paso, Texas. I ended up forming an Iron Maiden tribute band called Powerslave in Phoenix, Arizona after that and played with them for about 2.5 years and also played in a Guns’n’Roses Tribute called “Get Yer Gunz” doing Slash. I’m currently back in Los Angeles and working on yet another Iron Maiden tribute project which will have some of the best musicians in the L.A. scene. As you can see I’m still keeping very busy with the band projects and just love to be out playing live.

You were working on a band project with current Cirith Ungol bassist Vern Green. What can you tell me about that project?

The project I was working with Vern included a great local drummer but it was a startup project which never got off the ground unfortunately. I would say it was more melodic heavy metal, I remember it sounding somewhat like Shotgun Messiah meets Skid Row. The project was started in 1991 and didn’t last more than 6 months as it was very difficult to find a singer at the time.

When did you join the legion?

Were any of your rehearsal with CU recorded?

I don’t remember any rehearsal being recorded unfortunately.

How was the video for Join the Legion?

The video for Join the Legion was pretty interesting as it was done in an old amphitheater, and I remember having to stand on this narrow ledge something like 15-20ft high and play guitar..I remember it being pretty funny. I actually searched all over the Internet for it and would love to see a copy..if you ever come across the video please send me a copy 🙂

I found Mystery Blue on Metal Archives, but I cant see your name there. Are you playing on any of their recordings?

I recorded a 45 with Mystery Blue when they decided to take a more “commercial” direction with a ballad called Mary and a remake of their most famous song ‘Rock’n’Roll Hero” which we recorded at a pretty famous studio called . You can go to this link and will see my maiden name (Bijan) mentioned: France Metal Museum

(Google Translating a bit here, much more if you read the own website. The guitarist Bijan is from 1988 to 1989) 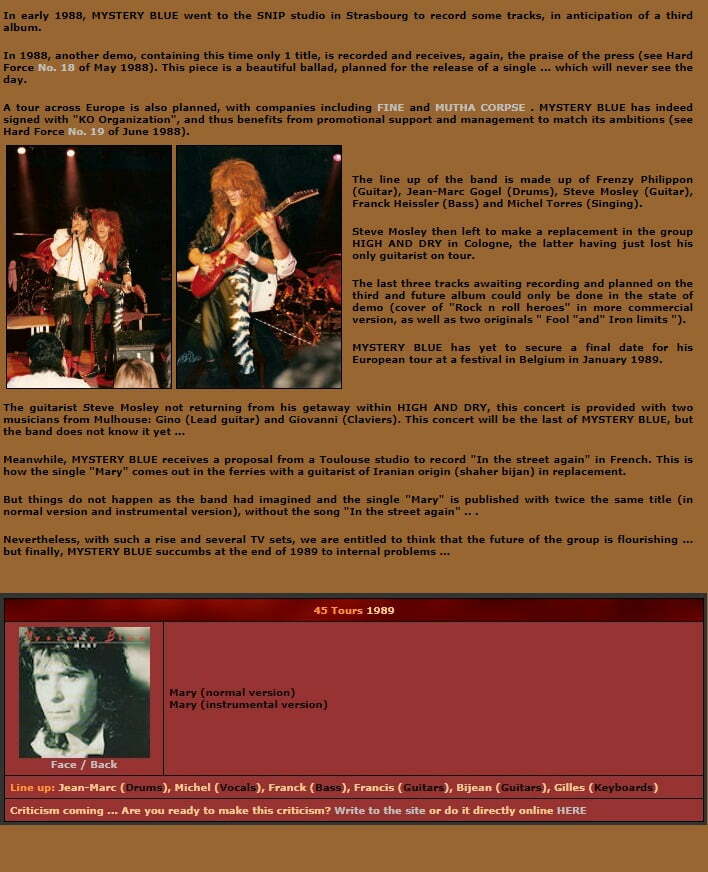 Can you give me a list of all recordings you are playing on (demos, singles, albums) with any band?

Most of my professional recordings were Instrumental work done on Multimedia/Video Game titles throughout the 90’s as well as with Tribute Bands.
Some of the highlights were: Future Shock that I wrote for the game Terminator Sega DC back in 1993, Dive (Treasures of the Deep), Mission X (Burning Road game), Over The Edge 9VMX racing), Subterranean (Earth Worm Jim 2), also played guitar on the main black demo disc when the Sony Playstation was launched. Also did some demos with Hangar 18 and Powerslave my last Iron Maiden tribute.

You have played in AC/DC, Megadeth, G n’ R and Maiden tribute bands, how about a Cirith Ungol tribute band? I don’t think that has been done before! 😎

Interesting idea about doing a Cirith Ungol tribute..definitely hasn’t been done yet. I’m up for just about anything as long as people want to hear the music, I would love to play. 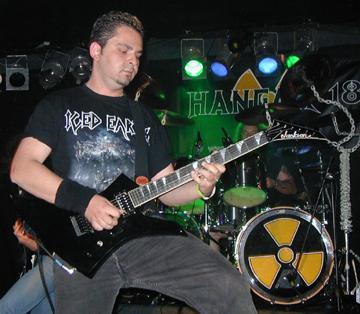