Cult band Cirith Ungol released their latest album “Forever Black” earlier this year, their first album in 29 years (!!!) and what an amazing comeback to say the least! If you haven’t listened to it, go check it out right now!
But 29 years ago their album Paradise Lost were released and basically broke the band entirely, and I thought it was an interesting story to get deeper into and fortunately I got the opportunity to do this interview with drummer Rob Garven and guitarist Jim Barraza.

2020 has been a shitty year with the Covid pandemic, so let’s end this craphole of a year with some great music!
A huge thank you goes out to Rob and Jim for this interview, and to Jarvis who set it all up!
Hope you all enjoy! 🙂

1. After reading your story on Metal Archives about the hell that was the recording session of Paradise Lost and its aftermath, it’s not hard to understand why you didn’t like the end result. But do you guys still dislike it? Was it an album that you simply didn’t think turned out good songs or was it entirely because of the horrible experience that left a bad taste in your mouths?

Rob: That is a complex question. I never disliked the majority of the material on that album. The core of the songs including the “Paradise Lost” trilogy, “Join the Legion” and “Before the Lash”, were all amazing songs. The other ones should never have been on that album and were only put there out of deference to the newer members that played on the album. They were not bad songs, but they were never “Cirith Ungol” songs, and I think that was a mistake. Also, we had no control over the production of that album, which was hard for a band that had had complete control over much of their previous work.

The good news was I got to bury the hatchet with the producer Ron Goudie when we met at several of our European shows. He had opened up a studio in Amsterdam, and we got to renew our friendship before he recently passed away.

In the end when Metal Blade released their latest version, we all got to reflect on the album as a whole, and I think to take it for what it is, a “Cirith Ungol” album with some flaws but some definite highlights!

2. And I would like to sneak in a bonus question for Mr. Barraza, and just hear what your thoughts were on the recording session as it was your first with Cirith Ungol?

Jim: Almost 2 years prior to the recording session I worked with Flint while he was still in the band. He was involved in the early aspects of the song writing, being at band practice to jam out Ideas, find a riff or a groove, change a note and/or tweak a chord progression or structure for what would eventually become the songs as you hear them recorded on album. I believe Flint did some of the first Paradise Lost demos with us, excluding, Go it Alone, Heaven Help Us, or The Troll.

After Flint left the band, we had to find other personnel quickly, because at that time it was looking like we had an upcoming studio date. It took some time to find Bob Warrenburg and Joe Malatesta. We just needed a bassist and not a 2nd guitarist, but Bob would not do it unless we included Joe, and that could each bring in one of their songs, to be on the album.

We had a few years playing these songs and I had my parts down, we all did. We finally got a confirmed date to record the album. It was to be at Goldmine studios which was no more than 50 feet away from our rehearsal room at the time and very convenient.

To answer your question directly, what is more burned into my brain, is all we went through before the recording. The recording sessions was easy, we knew what to do by then. The producer Ron Goudie and I got along fine. It is true that he made us do that album recorded with a click track, and only one musician in at a time. All in all, I walked away from the sessions feeling some accomplishment and generally pleased. Recording an album with a notable band was my dream and goal, when I left my home state to go to California to be a “Rock Star” after high school. Cirith Ungol gave me that opportunity. 25 years after the recording of “Paradise Lost” and the breakup of the band, it was all worthwhile and finally got me to Europe and South America. So, basically what you do today can come back and bite you in the ass 25 years later, in a good way.

3. A question for you Robert Garven. you wrote on Metal Archives that you cried when you heard the final version of Paradise. Now, I personally think it’s a great album, but if you could have remade it today, what would you have done differently in order to fit your original vision? What was your original vision?

Rob: If we were to hypothetically do it over today from scratch, I would shelve those songs I mentioned, write some new material along the same lines as the other existing songs, and record it like we did all the other albums, as a group. I think it could have been more, maybe much more, if we had done it like that from the beginning! We recorded some demo versions, which were closer to what we originally intended, which can be heard on our 2001 release of “Servants of Chaos”.

4. You have also stated that it was really difficult to get back the rights for Paradise Lost, but eventually it was re-released by Metal Blade Records. How did that end up happening after so many years of trying without even getting any responds back?

Rob: When we signed the deal for that album, even though we had a well-known lawyer, we unknowingly signed much of our rights away. Years later, Metal Blade Records wanted to re-release it, but for some reason the owners would not license it to be produced. I know they tried for years and finally got the rights to re-release it in a limited edition. I am still not sure how they made it happen, but Metal Blade Records has been amazing to the band. After so many years of frustration, we have finally been treated with true respect by everyone there in Europe, and the US.

5. Moving away from Paradise Lost. In a previous interview Jarvis Leatherby did say there are plans for the Frost and Fire album for its upcoming anniversary. My question is if there’s a chance the world would see Cirith Ungol take it upon themselves to re-record the album or maybe playing it live in its entirety?

Rob: HA now that would be something! I am not sure what all is planned for that project but I know we have the original recordings, and the plan is to do something spectacular. It will probably be along the same lines of how Metal Blade released the ultimate edition of “King of the Dead” which was nothing short of amazing!

6. Even though I know many people dislike when artists re-record their old classics, I personally am a sucker for them because it really tells how the band has changed over the years and I think it would be really cool to hear that entire album re-recorded with this “new” line up.

Rob: I don’t think that will ever happen. At our age we may have only a few projects left, and we want to make them count. “Witch’s Game” and “Forever Black” were a mere down payment on that promise, and the goal is to go out with a bang! We are working on something now that will satisfy those listeners wanting to hear old classics!

7. People always talk about King of the Dead or Frost and Fire being your best albums, but I want to ask how the band feels about One Foot in Hell? I have to admit that it was the last Ungol album that I purchased, but I actually think it’s one of your strongest albums, why do people seem to forget about it?

Rob: Ha, that’s funny as many of my favorite bands I only had their first 3 albums! “One Foot in Hell” is a solid album and there is nothing bad I can say about it. The only thing we did wrong was leave Metal Blade Records, after that was released. To be honest, I am not sure why that happened, but it was a mistake. Some my favorite songs are on there “Blood & Iron” and “Chaos Descends”! I wrote the lyrics to “Doomed Planet” and they were my prophecy on what we are all living right now!

8. You recently released Forever Black, your first album in 29 years! How did that entire process feel, the writing and recording session and ultimately getting the fan response? It must have felt really refreshing for the band considering your previous experience was that of Paradise Lost?

Rob: It was an incredible experience, and we wanted to make a bold statement, that we were back. The band was writing new material as soon as we reunited, and finally being able to release our 5th studio album, 29 years after “Paradise Lost” was the culmination of our collective dreams. We were not sure what the response would be, but we felt it was a strong album filled with tales of “Sword and Sorcery” imagery and laden with layers of Doom! It was ironic that an album so dark would be released during a time of so much pain and suffering.

What are the future plans for Cirith Ungol that you can reveal for us? More studio albums or will Forever Black be your last effort?

Rob: There is not much I can reveal now except, the band has been forging new molten metal in out underground secret lair. “Forever Black” was just a taste of what is to come, and more projects are on the way! Our shared vision is to bring a “A Churning Maelstrom of Metal Chaos Descending!”

Thank you so so much Rob and Jim for taking your time for this interview. I highly appreciate it 🙂

Rob: Robin, Thank you, for your interest and continued support of “Cirith Ungol”. We were lucky enough to play in Sweden at Muskelrock, and hope that we have the opportunity to return and lay down some heavy riffs! 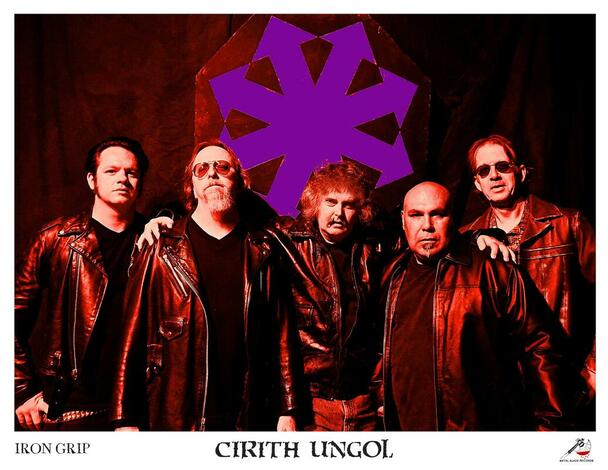