Back in 1972, in the shadows of Ventura, California, the American Version of Doom Metal was born in the name of CIRITH UNGOL. They were the foundation of the genre and inspired countless bands to follow in their footsteps. Between the years of 1981 and 1991, they offered 4 full-length albums and disappeared from the scene completely. In 2015, the seeds were planted for them to come back and take their crown back. 2020 saw the release of the first album in almost 30 years called ‘’Forever Black’’, Jean-François Poulin had the privilege to sit down with the band and talk shop!

In 2015, you guys came back to the scene, what was the catalyst for the reunion itself?

Rob: Jarvis Leatherby played a pivotal role in the reformation of the band. I had a friend Carl Valdez, who was the original drummer in a famous local punk band “Ill Repute”. He was friends with Jarvis, and told me that Jarvis wanted to meet, to discuss Cirith Ungol. We met, and I was amazed at his stories of traveling with Night Demon. They had met many who still were interested in Cirith Ungol, especially on the continent. He suggested resurrecting the band. Jarvis was putting on a festival in our hometown of Ventura, California, the Frost Fire Festival, and had booked bands from all over the world come and play. He asked if we would do a signing session and all the original members (except Jerry Fogle who has tragically passed away in 1998) attended. The festival was a great success, and at the signing session many showed up with albums to be signed and it seemed a new generation had discovered our music, we had worked so hard on, for so many years Jarvis had invited Oliver Weinsheimer from the Keep it True Festival and after the signing session he wanted to talk to the members alone, so we along with Jarvis, retreated across the street to a local sushi bar. Oliver had been in contact me since 2004, about getting the band back together, and I had told him that I appreciated his offer, but it was never going to happen. So now we found ourselves; Jarvis, Oliver, Greg, Tim, Flint, Jimmy and myself all sitting around at a table wondering what was to come next. Jarvis having just hosted an amazing festival said he planned on putting on another one Frost & Fire next year and asked us if we would reform and were interested, we could headline his show. Oliver also talked about how successful his festival was in Germany and asked us if we reformed, we could headline his 20 th anniversary show in 2017! This was quite a bit to take in, as we had all spent the last many years pursuing other lives an getting the band back together seemed like a long shot. We were hesitant at first, but deep in our soul the fire of true metal burned, and we all decided to unleash the being called Ungol back onto the unsuspecting world!

Rob: The band started in 1971, when Greg Lindstrom, Jerry Fogle and I decided to leave the band “Titanic” to form a heavier trio. We were about 13 years old at the time. Greg and I had been in an advanced reading class and were assigned to read J. R. R. Tolkien’s “Lord of the Rings”. We were thinking of a few other names but for some reason Cirith Ungol had a certain ring to it. It is a tower on the edge of Mordor, both very dark and evil places.

You guys put out The Legacy Box Set back in 2017, it awoke a monster back from the dead in a sense, how proud you guys were of that material
coming back to the forefront?

Rob: Metal Blade Records released two fantastic ultimate editions of our 1884 album King of the Dead, and our 1991 album Paradise Lost, both to
commemorate these past glories. I think though you may be talking about the cassette box set which came out in conjunction with our show at Up the
Hammers in Greece? We did not know there was much a market for cassettes still but they sold out pretty fast. That show was also filmed for our live album I’m Alive, which was released late in 2019. We are very happy to see all our old music being released to a new generation of metal aficionados!

You added the likes of Jarvis Leatherby to the band in 2016, what did he bring to the table for the band? I love NIGHT DEMON, hell, I am wearing their last Tour shirt right now!

Rob: Originally Flint was going to play bass but he lives quite a way from the rest of us, and soon we all realized that that would be logistically impossible. Jarvis got the band back together, was our manager, and we all agreed that him playing bass seemed like the perfect solution. He brings to the band his knowledge of the music business, touring, and also his pounding bass style and stage presence!

What happened after the release of ‘’Paradise Lost’’, I know you guys split up in May 1992, was there something specific that came up or was it time to do something else?

Rob: Our company at the time, Restless really didn’t support the band, and it was obvious after the album’s release we were going to be on our own again. Several members left the band and Tim and I were the last men standing. The music business at that time was all hair and thrash bands, and we did not fit into either category, and could see no real path forward, so it was decided to let the being called Ungol slip beneath the waves like the elder god Cthulhu, never knowing we would rise again, to ravage the earth!

I know Greg Lindstrom made two albums with FALCON, is there any plans on doing more material with them in the coming future?

How was that first reunion shows at the Frost and Fire II Festival?

Rob: It was the culmination of a life’s dream. Headlining the same venue, we played before the band broke up, to a sold-out show with fans from all over the planet attending. It was simply amazing, and here was not a dry eye in the house!

You were supposed to do some extensive touring for ‘’Forever Black’’ in 2020-2021. I know you guys are very Europe-oriented and West Coast based as well. Any plans on touring maybe Canada? I believe you guys have a very solid fan base here.

Rob: We had a show booked in Montreal for 2020, which was cancelled, but we still hope to play some shows in Canada. My wife is from a small town
Kemptville, Ontario! I love Canada, and being a racing fan a big fan of Giles Villeneuve! The band has not been touring in the traditional sense. Several in the band still have full time careers, so we have been relegated to playing just a handful of very rare and special appearances each year.

What were the bands that influenced you guys when you were thinking of possibly forming the band? You guys have toured with a number of bands in the genre, do you have some great road stories, especially when you guys began in the 70’s?

Rob: I can’t speak for all the guys in the band but I still listen to a mix of traditional heavy metal old and new. We have lots of stories, but back in the day we were mostly the opening act and were always treated pretty badly, no sound checks, no dressing rooms, etc. But time heals all wounds… More fun are the stories of hanging around other bands such as; Rush, Yesterday & Today, and others back when we all were just starting out!

What do you think was missing in the genre after you guys split up back in 1992?

Rob: I think the true metal we always loved never died, but definitely it went underground a bit. Many fads come and go, but true metal shines like a beacon in the night, lighting the way for those initiates that chose to heed the call.

Any bands you guys would like to tour with in the coming future?

Rob: We had a whole series of festivals lined up for 2020 with most being cancelled or postponed. The hope is we come out of this nightmare all in one
piece and stronger. If that happens we will unfurl our banner and continue to conjure up the darker side of man’s eternal struggle. A Churning Maelstrom of Metal Chaos Descending!

In October of 2016, you received a proclamation from the mayor of San Buenaventura, California congratulating you guys on your reunion. How did that touch you guys on the personal side of things?

Rob: It is our home town and although visually beautiful, not very metal oriented. I think it was more of a recognition of Jarvis’s festival; Frost & Fire; which had brought so many global visitors to our sleepy seaside community. It still was pretty awesome! I worked in that haunted building, built on unhallowed ground, for many years, and it was depicted on the cover of Night Demon’s album, “Darkness Remains.”

Michael Whelan did most of your artwork for your albums, how did you meet this incredible artist?

Rob: We forged a relationship with Michael Whelan with our first album, Frost & Fire. We were looking for a cover for the ultimate demo we were putting out, to try to get record company attention I was reading Michael Moorcock’s final Elric book, Stormbringer, and looked down at the cover and realized that this painting would be the best album cover off all time. I contacted DAW Books, who put me in contact with Michael Whelan, and we have been good friends ever since. Our goal was to use his series of Elric of Melnibone covers from the 1980’s DAW Book editions for all our covers. Of course, back then we were a young band and had no idea what the future held for us, or how many albums we would be able to produce. When the concept of the “Forever Black” album was coming to life, we wanted something equally dark and brooding as the music for the cover. We found this small study of Michael’s entitled, “Elric in Exile”, which fit perfectly the atmosphere of the album concept. Once again, we are honored and privileged, to have this renowned artist’s work again gracing our latest album, and hope to continue to work with him on any future projects!

So what’s next for CIRITH UNGOL, any plans on doing some studio work during our trying times?

Rob: That is the plan, we are taking a short break but intend to start pounding out molten metal, as soon as the furnace is glowing red hot again!

Thank you so much for the opportunity to interview you guys for Metal Temple!

Rob: It was my pleasure. Thank you for your review of “Forever Black” which was just released yesterday on Metal Blade Records! Hope that your readers will pick up a copy, and you will all Heed the Call and try to make it out to one of our very special appearances to Join the Legion! 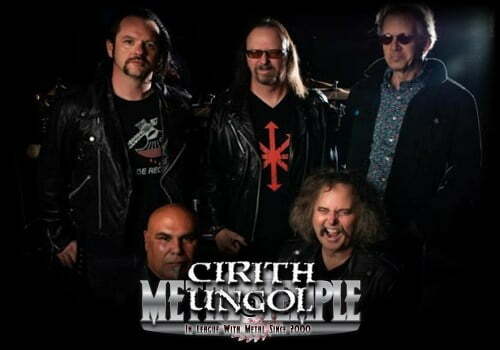