Interview from the Pit …

“As far as I’m concerned, you know, if you put on King of the Dead and take a couple of bong hits and turn it up to 10, I don’t see how anyone can find anything more — I’m sure there’s other stufff that will compare with that for radicalness, but, I mean, that’s as radical as we could get — I think it’s pretty heavy.”

So spake Robert Garven Jr., drummer and spokesman for California’s Masters of Metal, Cirith Ungol. CIRITH UNGOL! “Give me 8 cents!” you cry. Well, damn right, I’ll give you 8 cents, and power to them for it, but I’ll give you more, a lot more. I’ll give you a tale of a band’s dedication to the Vision of True Metal.

It’s not every band that would have the perseverance to stick to their True roots through the lean years before the “Metal Renaissance”, to still retain their love of the music and all that is Gothic and Deformed. The nucleus of Ungol — Robert Garven and Jerry Fogel (guitar) — have been playing together for 14 years. “Why stay together 14 years?” shriek 15-year-old-bandana-heads aghast. “Why Ratt have only been togethEr 2.” That’s dedication, or as Garven calls it “some sort of — like — inner drive or strength”, a belief in an ideal.

From the very beginning, they’ve played Heavy Metal, and watched the L.A. scene crawl up from slime to rear its ungly beastial head before the world. In fact, their debut album Frost and Fire was the first record ever released on Enigma, the company behind the early success of Ratt and Motley Crue … and CIRITH UNGOL have played with all the bands now signed major record deals. But don’t MISTAKE — CIRITH UNGOL is no poofter glam band, and perhaps that accounts for their still Underground status. They hold strongly to the belief that it is the music that is of utmost importance. “We’ve seen this whole Metal scene go from nothing to real big,” Garven says. “And unfortunately we just weren’t sucked up in it because we don’t have no gimmicks … if they [other L.A. bands] can make it, and yet we can’t , it makes me think the music doesn’t mean anything and it’s just some gimmicky thing, it reminds me of the President. They’re not electing him because he’s great; they’re electing him because of his smile or toothpaste. It’s sad when you think about it.”

CIRITH UNGOL may not have a gimmick, but they do have a well thought out presentation that cohesively combines music, lyrical content, and graphics to create an aura of maelstromic chaos, steeped in Tolkien, Moorcock, and H.P. Lovecraft. Their sound is, coming from a band hatched from the very nest (albeit a much earlier brood) as the likes of Keel and Dokken, to use Garven’s term, a radical departure from the all-too-cliched mold. It requires the proper ear.

“You really have to like Heavy Metal [to understand KOTD]. Since all of us grew-up listening to Heavy Metal, that’s all we lived and breathed, we can understand that, but some guy who’s really into poseur rock, they can’t get behind it, because they can’t understand it. They say, ‘What are these guys doing?’ They think we’re trying to fry eggs with our music.” And that’s a shame because this is an album that should be gotten behind. One with originality and integrity enough to stand out in the crowd.

“I know a lot of people are into the trash Metal now, but to me … Heavy Metal is Heavy Metal. I think if you say ‘Hey, we’re only going to play fast.’ you’re limiting yourself. We’re not interested in anyone’s speed. And you know, say if want us to play real fast, tell people to put the record on 78 … What we try to do is, we try to play real precise, real exact type music. A lot of guys say, ‘Well, hey, your singer’s too radical and this and that … but, I mean, if we want to be on the cutting edge of Metal, if we want to do the most radical, far-out thing we can, we don’t want a singer that’s going to sound like Frank Sinatra.”

This dedication to being as radical as possible, to being totally heavy, along with an unfortunate lack of promotion, and limited funds, has hurt CIRITH UNGOL in a commercial sense. Although King of the Dead has sold 10,000 copies in the States alone and at least as many more overseas (very respectable for a band on an independent label), they still are plagued with financial problems and the failure to receive the kind of publicity they deserve. “Our biggest sadness, and the biggest depressing thing for us, is that we really think King of the Dead is like a classic Metal album, and for it to be like completely passed over, and people not be able to find it ….. With King of the Dead we just wanted to punch people in the face, and I think in a way it may have back fired on us, but I don’t think we could have done anything different if we had to do it over again … I think, if we had better promotion, we’d be getting a better break.”

CIRITH UNGOL, however, most definitely have their fans, and enthusiastic ones at that. As we speak, Garven flips through the days mail, letters from around the country: Illinois, Maryland “You guys are the greatest” and Connecticut “aaarrrrrgh!”. I ask about the greeting from Celtic Frost on their new album, “Oh yeah, a couple of those guys used to be in Hellhammer. They’re like original fans of us. They wrote us, and sent us all their tapes. Never met ‘em, but we’ve carried on correspondence for the last couple of years and stuff.” A real band’s band, so to speak.

The fans and the love of True Metal keep them going. Right now they’re working hard on new material for their third album, which, finances permitting, they hope to begin recording in August. “We’re going to stay together. No one’s going to break us down. We just may not be doing any real big stuff right away.”

Well, we fans of abominogacious Metal can only scream:

And So It Begins … 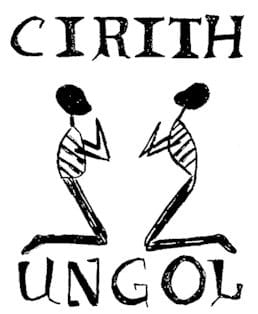 In the sight of apish scum,
ageless muck of ancient river beds
seeps about the roots of cypresses
as the hellrains pound the darkening land.

Up from the slime,
ride the Masters of the Pit,
CIRITH UNGOL,
dripping sweat and blood
shrieking their bestial cry:

Clock on his head,
His best friends
call him:
FRED!

From age to age, Flint’s bass does bloob.
‘Til mankind falls to apish goo.

Unbeknownst whether birthed or hatched,
Tim Baker knows no mould save mold.
It clings to his voice like satin sheets to a dog biscuit,

Screaming in terror,
there you’ll lie in Cirith Ungol,
Tower of Fire.

Support the artists, buy records or merchandise of Suck City no.6 vol. 8 🛒
These links are automatic generated links and may not always give the best search result. Sometimes you might need to refine the search after having tried any of these links. Some are affiliates and some are not. If you know about any good deal for Suck City no.6 vol.8, don't hesitate to add a link in the comment field or in the forum.
Categories:
0 0 votes
Article Rating
Subscribe
Connect withD
Login
Connect withD
0 Comments
Inline Feedbacks
View all comments 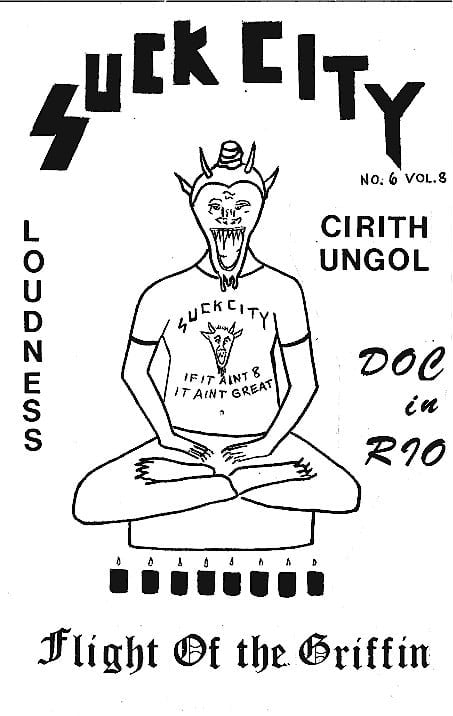