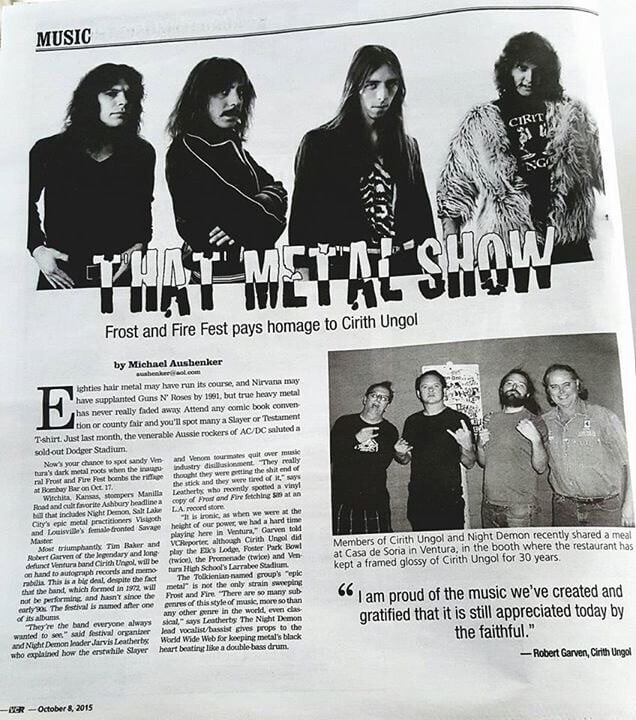 Eighties hair metal may have run its course, and Nirvana may have supplanted Guns N’ Roses by 1991, but true heavy metal has never really faded away. Attend any comic book convention or county fair and you’ll spot many a Slayer or Testament T-shirt. Just last month, the venerable Aussie rockers of AC/DC saluted a sold-out Dodger Stadium.

Now’s your chance to spot sandy Ven bara’s dark metal roots when the inaugural Frost and Fire Fest bombs the riffage at Bombay Bar on Oct. 17.

Most triumphantly Tim Baker and Robert Garven of the legendary and long defunct Ventura band Cirith Ungol, will be on hand to autograph records and memorabilia. This is a big deal, despite the fact that the band, which formed in 1972 will not be performing and hasn’t since the early 90s. The festival is named after one of its albums.

“They’re the band everyone always see” said festival organizer lead vocalist/bassist gives props to the and Night Demon leader Jarvis Leatherby who explained how the erstwhile Slayer and Venom tourmates quit over music industry disillusionment. “They really thought they were getting the shit end of the stick and they were tired of it,” says Leatherty who recently spotted a vinyl copy of Frost and Fire fetching $89 at an L.A. record store

“It is ironic, as when we were at the height of our power, we had a hard time playing here in Ventura,” Garven told VCReporter, although Cirith Ungol did play the Ex’s Lodan Foster Park Bowl (twice), the Promenade (twice) and Venturas High School’s Larrabee Stadium.

The Tolkienian named group’s “epic metal” is not the only strain sweeping Frost and Fire “There are so many sub genres of this style of music, more so than any other genre in the world, even classical”, says Leatherby The Night Demon lead vocalist/bassist gives props to the World Wide Web for keeping metal’s black heart beating like a double-bass drum.

“Members of Cirith Ungol and Night Demon recently shared a meal at Casa de Soria in Ventura, in the booth where the restaurant has kept a framed glossy of Cirith Ungol for 30 years. “I am proud of the music we’ve created and gratified that it is still appreciated today by the faithful.” -Robert Garven, Cirith Ungol –

Ps! Probably incorrect with some of the spellings.