Record I Am Vengeance • Band Various artists Format soundtrack, unreleased, various
Back to... 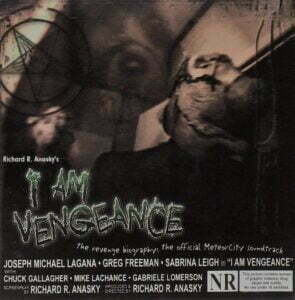 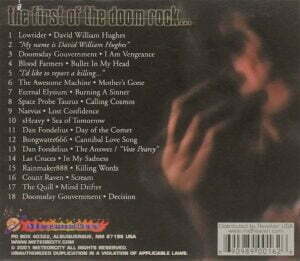 Richard R. Anasky’s I Am Vengeance – the revenge biography: the official MeteorCity Soundtrack

V/A: I Am Vengeance soundtrack CD – Mike got some nasty video clips, sound samples and missing tracks from Richard Anasky and will soon begin to sequence and compile our version of the soundtrack. The METEORCITY version was released to muc acclaim several months ago. G2’s volume [edit: Game Two Records] will feature BONGWATER, BUFFALO, CHURCH OF MISERY, CIRITH UNGOL, GRIEF, MIRROR OF DECEPTION, PENTAGRAM, SHEAVY, SOLITUDE AETURNUS, SOLSTICE and many more.

The Soundtracks… Now THIS was the most enjoyable aspect of making IAV!

Meteor City recently released soundtrack Volume 1 and it includes nothing but incredible bands! Amongst the bands appearing on this Volume are “Space Probe Taurus”, “sHEAVY”, “Count Raven”, “Rainmaker888”, “Bongwater666”, “Naevus”, “Lowrider” and MANY other’s! Meteor City has done an amazing job in crafting a perfect flow amongst the bands, styles and songs and Jeff Shirilla (Abdullah) delivered perfect sleeve art! I absolutely loved his choice to put the 2 masked cultists on the cover!

GAME TWO Records will release soundtrack Volume 2 some time in the future (I’m still getting things together for it). This volume will contain Doom heavyweights like “Pentagram”, “Church of Misery” (who’ve delivered an AWESOME original IAV track in “Retal”!), “Solitude Aeturnus”, “Northwinds”, “Mirror of Deception” and many more of course. The GAME TWO Volume will also include a touch of old school metal courtesy of “Cirith Ungol” and NWOBHM legends, “Buffalo”. Both soundtracks also contain original score music from Dan Fondelius.

I made all the choices as to which bands and which songs would appear on the soundtrack… Credit Meteor City with leading some good bands to the project though. They introduced “Lowrider”, “The Quill” and “Mirror of Deception” to me for soundtrack consideration and each ended up contributing an excellent track!

Meteor City hooked up with me through the Internet and they’re also responsible for leading GAME TWO into this madness.

“Lord of the Rings” is a great movie, better than I expected. The actors were all good, the special effects were great, and the scenery was breathtaking. I can’t wait to see the second part. We have an unreleased song called “Shelob’s Lair” that would be quite appropriate for the second movie, “The Two Towers”. We will be on the soundtrack to the horror movie “I Am Vengeance”, on Game Two Records, coming in 2002.

For some unknown reasons, they do not appear on the album. Tracklist below so you can double check. The soundtrack was released on MeteorCity in 2001. Also it is subtitled “Vol. 1”, but I can’t find any volume 2. I asked Game Two Records about it, and here’s the answer:

It’s true that Game Two was supposed to release Volume II of the IAV [edit: I Am Vengeance – Vol. II] soundtrack, but it never happened.  It was due to some difficulties I had with a partner in Game Two at the time named Mike Knecht.  Mike received all the master recordings for the release but never finished compiling the album.  He eventually dropped out of the scene.  It sucks for me because I paid MeteorCity royalties to do the release but I was never able to take advantage of selling it.

The second soundtrack, trailer and film is not finished, hide or it is possibly deleted also. 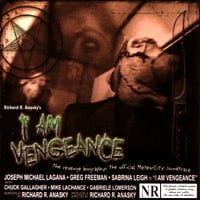 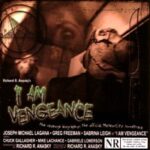