John Ronald Reuel Tolkien, CBE FRSL was an English writer, poet, philologist, and university professor who is best known as the author of the classic high fantasy works The Hobbit, The Lord of the Rings, and The Silmarillion.

Cirith Ungol (pronounced [ˈkiriθ ˈuŋɡɔl]) is a pass through the Ephel Dúath, the high mountain-range on the west of Mordor. The name is Sindarin for Spider’s Cleft, or Pass of the Spider, referring to the guardian of the pass, Shelob, a great spider.

The pass of Cirith Ungol was one of two entrances into Mordor from the West, along with the Morgul Pass. The two passes were fairly close together, but Cirith Ungol was less used, being higher, steeper and narrower.

If these difficulties weren’t enough, anyone using the pass of Cirith Ungol had to go through Torech Ungol, a network of caves and tunnels near the top of the pass. Shelob had her lair in these caves, and set traps for travellers in the tunnels.

During the Quest of the Ring, Frodo Baggins and Samwise Gamgee were led to the Pass of Cirith Ungol by Gollum, in order to get into Mordor. An illustration of Cirith Ungol, by the Brothers Hildebrandt

The Tower of Cirith Ungol is a watchtower and fortress on the border of Mordor. It is an important scene in The Lord of the Rings, in particular the chapter which bears its name: chapter 1 of book 6.

The Tower of Cirith Ungol was located high in the Mountains of Shadow overlooking the pass that was called Cirith Ungol—the Pass of the Spider—because the Great Spider Shelob dwelt there. The Tower was located near the top of the pass on the north side, and the base of the tower joined the eastern face of the mountain. The Tower of Cirith Ungol was made of black stone. It had three tiers, each set back from the next lower one like steps. The sheer sides faced northeast and southeast and formed a bastion pointing eastward. At the top of the Tower was a round turret that could be seen above the pass.

A road ran down from the pass and skirted the Tower alongside a sheer precipice before turning southward to join the Morgul-road. The Tower of Cirith Ungol was surrounded by an outer wall that was 30 feet (9.1 m) high. The sides of the wall were smooth. At the top was overhanging stonework that prevented anyone from climbing over it.

The Tower of Cirith Ungol has been illustrated by artists such as John Howe, the Brothers Hildebrandt, and Alan Lee. The image by Tim and Greg Hildebrandt features an eruption of Mount Doom in the background and one of the Hobbits looking at the tower from a rock spire in the foreground. The Two Watchers are not depicted, although the castle-like structure of the tower shows a gate.

History of the Tower

The Tower of Cirith Ungol was built by the Men of Gondor after Sauron was defeated in the War of the Last Alliance at the end of the Second Age. The Tower was the easternmost outpost of the defences of Ithilien. Its original purpose was to keep watch on the land of Mordor to ensure that no evil things escaped and to guard against the possibility of the Dark Lord’s return. But over time, as Gondor’s power declined, the vigilance on Mordor became lax and the Tower was deserted.

After the Lord of the Nazgûl returned to Mordor in T.A. 1980, the Tower came under his control. From Cirith Ungol, he led an assault on Minas Ithil, which was captured in 2002 and became his stronghold, known as Minas Morgul. Sauron returned to Mordor in 2942, and used the Tower of Cirith Ungol to prevent any of his slaves or prisoners from escaping from Mordor. A garrison of Orcs were stationed in the Tower, and at the time of the War of the Ring their captain was Shagrat.

Entrances to the fortress

The main gate was in the southeastern side of the fortress’s outer wall. It was guarded by the Two Watchers—hideous statues seated on thrones. Each Watcher had three joined bodies facing inward, outward, and toward the other. The description in the book is as follows:

They were like great figures seated upon thrones. Each had three joined bodies, and three heads facing outward, and inward, and across the gateway. The heads had vulture-faces, and on their great knees were laid clawlike hands. They seemed to be carved out of huge blocks of stone, immovable, and yet they were aware: some dreadful spirit of evil vigilance abode in them. They knew an enemy. Visible or invisible none could pass unheeded. They would forbid his entry, or his escape.

They thus had a kind of “psychic barrier” that barred the gate. Sam Gamgee had to overcome this obstacle while searching for his master Frodo Baggins. He did so by using the phial of Galadriel, which overcame their will and allowed him to pass. As soon as he was through, however, they sounded an alarm. It is not known if the Watchers were built by men of Gondor, as was the Tower itself, or if it had been added later by Sauron. Certainly, the spirit that dwelt within them must have come later, as it was clearly identified as being evil.

The fortress had a second entrance at the rear, known as the Undergate. This was located inside the Tower itself where its base abutted the mountainside. The Undergate opened onto a tunnel that joined with Shelob’s Lair.

Interior of the fortress

Within the outer wall was a paved courtyard, and of course the Tower itself.

There was a great door on the southeastern side of the Tower. The door opened into a passageway which ran back through the base of the Tower. There were rooms on either side, and at the far end was the arched door of the Undergate.

To the right of the Undergate was a winding stairway to the upper levels of the Tower. At the top of the stairs was a domed chamber with doors facing east and west leading out onto the roof of the third tier. The roof was about 20 yards (18 m) across and was surrounded by a parapet. On the western side of the roof stood the turret of the Tower.

The turret had slitted windows facing westward and eastward through which torchlight glowed like red eyes. A winding stairway led up to a passage running through the middle of the turret. A trapdoor in the ceiling of the passage opened onto a large round chamber at the very top of the Tower of Cirith Ungol.

The Tower in the War of the Ring

At the time of the War of the Ring, the captain of the Orc-garrison of the Tower of Cirith Ungol was Shagrat. On 13th ‘March’ T.A. 3019, he was leading a patrol down the Pass of Cirith Ungol at the same time as another Orc-patrol, led by Gorbag, was coming up from Minas Morgul. Frodo Baggins was caught by the two patrols as they met.

The Orcs took Frodo through the Undergate to the Tower of Cirith Ungol and imprisoned him in the topmost chamber of the turret. Frodo was stripped and questioned mercilessly. Gorbag coveted Frodo’s mithril shirt and fought Shagrat for it. Gorbag’s orcs and those of Shagrat’s garrison joined the fight, killing one another until virtually all of them were dead.

Sam Gamgee came to the Tower of Cirith Ungol to rescue Frodo. He got past the Two Watchers by raising the Phial of Galadriel, but once he was through the gate the Watchers gave a terrible cry and an alarm bell rang in the Tower. Sam entered the Tower and encountered Snaga, one of the few surviving orcs. Snaga mistook Sam for a great Elf-warrior and fled back up the stairs. Sam followed him to the roof of the third tier. There Sam confronted Shagrat, who fled with the mithril shirt and left the fortress.

Sam returned the Ring to Frodo and they escaped from the Tower disguised in its Orc armour and livery. They used the Phial to pass the Watchers, and the archway collapsed behind them. As they fled, a winged Nazgûl descended from the sky and perched on the wall of the Tower of Cirith Ungol, now in charge. Wikipedia.

They took their name from the place Cirith Ungol in J. R. R. Tolkien’s epic fantasy novel The Lord of the Rings. The name Cirith Ungol is Elvish and means “Pass of the Spider”.

The “Cirith Ungol” is name of three alternatives:

See the further song with logo and the Cirith Ungol.

The Corroseum: Now lots of people in and out of the Metal scene are very interested in Tolkien’s books, while you had read them a long time ago and have had as a source of inspiration for your musical work. What’s your opinion about the new version of “Lord of the Rings”? What would have been your response if the film’s director would have asked you to compose a couple of songs for the movie?

GREG: “Lord of the Rings” is a great movie, better than I expected. The actors were all good, the special effects were great and the scenery was breathtaking. I can’t wait to see the second part. We have an unreleased song called “Shelob’s Lair” that would be quite appropriate for the second movie, “The Two Towers”. We will be on the soundtrack to the horror movie “I Am Vengeance”, on Game Two Records, coming in 2002. 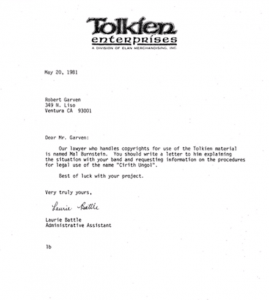 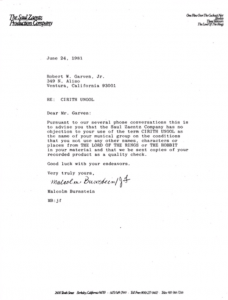 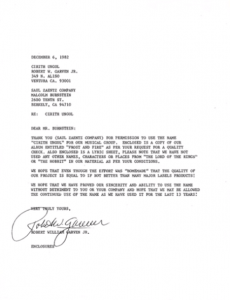 Support the artists, buy records or merchandise of J.R.R. Tolkien 🛒

These links are automatic generated links and may not always give the best search result. Sometimes you might need to refine the search after having tried any of these links. Some are affiliates and some are not. If you know about any good deal for J.R.R. Tolkien, don't hesitate to add a link in the comment field or in the forum.
Categories:
0 0 votes
Article Rating
Subscribe
Connect withD
Login
Connect withD
0 Comments
Inline Feedbacks
View all comments 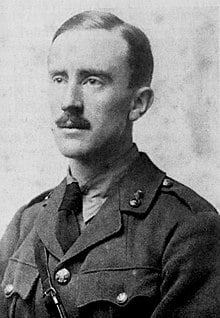