Black Sabbath are an English rock band, formed in Birmingham in 1968, by guitarist and main songwriter Tony Iommi, bassist and main lyricist Geezer Butler, singer Ozzy Osbourne, and drummer Bill Ward. The band have since experienced multiple line-up changes, with guitarist Iommi being the only constant presence in the band through the years. Originally formed in 1968 as a blues rock band, the group soon adopted the Black Sabbath moniker and began incorporating occult themes with horror-inspired lyrics and tuned-down guitars. Despite an association with these two themes, Black Sabbath also composed songs dealing with social instability, political corruption, the dangers of drug abuse and apocalyptic prophecies of the horrors of war. (Text taken from Wikipedia)

Cirith Ungol has played covers of Black Sabbath. Unfortunately I have no info about which, when and where.

Support the artists, buy records or merchandise of Black Sabbath


These links are automatic generated links and may not always give the best search result. Sometimes you might need to refine the search after having tried any of these links. Some are affiliates and some are not. If you know about any good deal for Black Sabbath, don't hesitate to add a link in the comment field or in the forum. 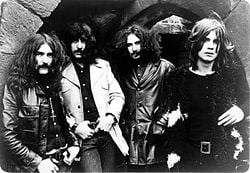