Freedom was a psychedelic rock band active in the late 1960s and early 1970s, formed initially by members of Procol Harum.

Ray Royer and Bobby Harrison, who had performed on the hit Procol Harum single “A Whiter Shade of Pale”, were kicked out of the Harum by vocalist Gary Brooker, and replaced by Robin Trower and Barry Wilson. Royer and Harrison then formed Freedom with Steve Shirley and Tony Marsh, who was immediately replaced by pianist / organist Mike Lease, releasing two German singles and the soundtrack for the Tinto Brass/Dino de Laurentiis film Attraction (original title Nerosubianco, also known as Black on White).

In 1968, Harrison entirely overhauled the group’s membership, and the new line up began recording with more of a hard rock sound, scoring tour dates with Black Sabbath, Jethro Tull, and The James Gang. They achieved great renown for their excellent version of the Beatles song “Cry Baby Cry” on their second album Freedom at Last. Further lineup changes occurred before the band finally splintered in 1972, with Harrison going on to Snafu. (Text taken from Wikipedia)

They have been covered by Cirith Ungol.

Support the artists, buy records or merchandise of Freedom 🛒
These links are automatic generated links and may not always give the best search result. Sometimes you might need to refine the search after having tried any of these links. Some are affiliates and some are not. If you know about any good deal for Freedom, don't hesitate to add a link in the comment field or in the forum.
Categories:
0 0 votes
Article Rating
Subscribe
Connect withD
Login
Connect withD
0 Comments
Inline Feedbacks
View all comments 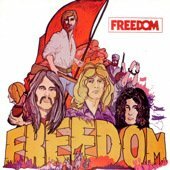 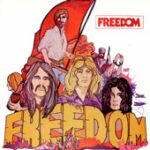