This is the Straw that Broke the Camels Back and was truly “Paradise Lost”,
Verified Purchase(What’s this?)
This review is from: Paradise Lost (Audio CD)
I was one the founding members and drummer of Cirith Ungol. This was our last album. We were treated so poorly by the record company that it broke the band up after 22 years. We had little or no artistic control over the production of this album, and even though we paid a big time lawyer $$$ to review the contract, we unknowingly sold the rights to album forever. When all our other CDs were re-released by Metal Blade of Germany, Restless the company that owned the rights to Paradise Lost, refused to let this cd be re-released. We were not even contacted by the current company releasing it, and will not receive any royalties from its sale. I even tried to contact them and received no reply

To add insult to injury our singer Tim Baker went to a local store and had to buy a copy of the CD. I urge you not to buy this CD and instead look for our other remastered CD’s "Frost & FIre" & "King of the Dead" & "Servants of Chaos" these are still in print in Europe (only!) and they were the only projects that we had artistic control over.

I was so upset by this project and its production and aftermath I swore "That I would never touch another drumstick or play drums, if it meant being in the same business as these people". Even though we have been offered many reunion tours and dates I have kept my oath, and expect that I will keep it until death…

Playing drums and Cirith Ungol was my life and passion and it is sad that such a great band with such untapped talent and potential had such little support while other bands with so little talent became huge commercial successes.

Well never say never, a few people which I love convinced me to play again!!! The band is back together and playing at some of the most exclusive festivals in the world. Come and see us play, you will not be disappointed!!!!! 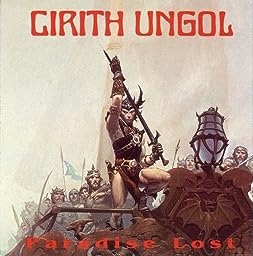