The Tales that Speak of “Frost & Fire”,
This review is from: Frost & Fire (Audio CD)
As co-founder and drummer of Cirith Ungol for 22 years I feel I need to respond to some of the reviews here.

A previous reviewer mentioned that “Frost & Fire” sounded thrown together. The real truth is that we had been in the band for 9 years already and “Frost & Fire” was our attempt to get “commercial” airplay and find success with what we considered some of our more accessable music and yes radio friendly music! When the local LA station KLOS played it once and considered it too heavy, we decided to go for broke with our second album and pulled out all the stops. I disagree with some of the reviewers and think Tim’s singing is not only excellent here and that “Frost & Fire” has some of his best vocals. This album features his highest pitched and clearest singing. Anyone who does not call it sining has to compare it with some of todays death metal. “‘Im Alive” was one of our all time best songs, which we started almost every set with. The LA Times said that Pearl Jams “Alive” was a blatant rip off of our song, which is debatable.

I also think the title track “Frost & Fire” is excellent with a great middle break and solo and that “Better off Dead” has a great bass line and some of Tim’s greatest singing range. This is all said looking back with a historical view that only I of all the reviewers can comment on being there the whole time. Jerry’s solos are amazing and his passing was very tragic and sad.

This album has to be listened to many times to appreciate the lyrics, songwriting and performance as a whole not separate parts and to understand as opposed to it being thrown together is was a calculated attempt to obtain a major label contract during a time that only bands with catchy songs that would get any radio airplay were signed. Although i think “King of the Dead” was more representative of the band I am most proud of this album because not only was it our first but it was graced by the unbelievable cover illustration of Michael Whelan’s epic portrait of Elric of Melnibone holding Stormbringer high above his head. This was a dream of ours and after so many years of struggle it was our reality.

Considering we produced, self recorded and paid for the entire project and that we were one of if not the first independent band to put out their own album before the wave of indie productions during that time, I think “Frost & Fire” “King of the Dead” & “Servants of Chaos” are a mandatory listen.

That said “King of the Dead” is my favorite and the last album which we had total control over. I am proud that we are mentioned in the same breath as bands that were epic and hope you all appreciate what we were trying to acomplish at a time when only big label bands had any chance of distribution or airplay.

Unfortunately for you the listener you never got to hear the other 20 or so odd songs that never made it to print such as: “Half Past Human – A Quarter to Ape” & “Brutish Manchild” but then that is another story for another day………… 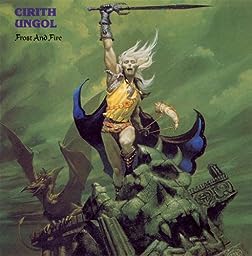