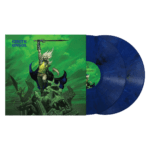 SIDE A – 40th Anniversary Remix

SIDE B – 40th Anniversary Remix

In 1981, a little-known visionary quartet known as Cirith Ungol released their self-financed debut, “Frost and Fire”, via their own Liquid Flames Records imprint. In that unassuming moment, the course of heavy metal history changed forever. You see, the world had never experienced a sound quite like “Frost and Fire” before. It was mystical and obscure, epic and expansive, but most of all bone-crushingly heavy, dark and doom-laden. For all its primitive and primordial qualities, “Frost and Fire” is also timeless, as earthshaking tracks like “I’m Alive” and the thunderous title cut remain cornerstones of the Cirith Ungol canon to this day.

In the intervening decades, legions of fans worldwide have been enraptured by Cirith Ungol’s bewitching spell and have fallen under the long shadow cast by these masters of the dark arts. Now, Cirith Ungol invites fans to ride the black machine for a fond look back at “Frost and Fire” in honor of its 40th anniversary.

Support the artists, buy records or merchandise of Cirith Ungol Frost Fire 🛒
These links are automatic generated links and may not always give the best search result. Sometimes you might need to refine the search after having tried any of these links. Some are affiliates and some are not. If you know about any good deal for 40th Anniversary 2LP – Midnight Blue Marbled Vinyl, don't hesitate to add a link in the comment field or in the forum.
Categories:
0 0 votes
Article Rating
Subscribe
Connect withD
Login
Connect withD
0 Comments
Inline Feedbacks
View all comments
⭐
👁 Views: 132
🕜 November 2, 2021 🔁 September 5, 2022 📓 Write your own writings 💬 No Comments
Tweets by Cirith Ungol