First of all, I’m sure you hear it a lot but a hearty welcome back! I was so excited when I heard Cirith Ungol were back and making music again. What inspired the reunion? Who was behind it?

Rob: Thank you so much. We are happy to be amongst the living again! Jarvis Leatherby played a pivotal role in the reformation of the band. I had a friend Carl Valdez, who was the original drummer in a famous local punk band “Ill Repute”. He was friends with Jarvis, and told me that Jarvis wanted to meet, to discuss “Cirith Ungol”. We met, and I was amazed at his stories of travelling with “Night Demon”. They had met many who still were interested in “Cirith Ungol”, especially on the continent. He suggested resurrecting the band. Jarvis was putting on a festival in our hometown of Ventura, California, the “Frost & Fire Festival I”, and had booked bands from all over the world come and play. He asked if we would do a signing session and all the original members (except Jerry Fogle who has tragically passed away in 1998) attended. The festival was a great success, and at the signing session many showed up with albums to be signed and it seemed a new generation had discovered our music, we had worked so hard on, for so many years.

Jarvis had invited Oliver Weinsheimer from the “Keep it True Festival” and after the signing session he wanted to talk to the members alone, so we along with Jarvis, retreated across the street to a local sushi bar. Oliver had been in contact me since 2004, about getting the band back together, and I had told him that I appreciated his offer, but it was never going to happen. So now we found ourselves; Jarvis, Oliver, Greg, Tim, Flint, Jimmy and myself all sitting around at a table wondering what was to come next. Jarvis having just hosted an amazing festival said he planned on putting on another one “Frost & Fire II”, next year and asked us if we would reform and were interested, we could headline his show. Oliver also talked about how successful his festival was in Germany and asked us if we reformed, we could headline his 20th anniversary show in 2017!

This was quite a bit to take in, as we had all spent the last many years pursuing other lives an getting the band back together seemed like a long shot. We were hesitant at first, but deep in our soul the fire of true metal burned, and we all decided to unleash the being called Ungol back onto the unsuspecting world!

For the most part it’s the classic line-up. Was anyone involved in other musical projects in the intervening years?

Rob: Greg was the only one of the original members that played professionally in his band “Falcon”

I believe the first full reunion show was at Frost & Fire II in 2016? How was that? Did it feel intimidating, or was there something natural about getting back into it?

Rob: It was the culmination of a life’s dream. Headlining the same venue, we played before the band broke up, to a sold-out show with fans from all over the planet attending. It was simply amazing, and here was not a dry eye in the house! It felt as if we had never left and we were glad to be pounding out our unique style of the heaviest metal known to man!

One of your first new pieces of music was “Witch’s Game” for the movie Planet of Doom. Who arranged that? Did the makers of the movie approach you about it?

Rob: “Witch’s Game” came about when Tim found mention of movie “The Planet of Doom” on the Internet. We contacted the producers because we had a song, “Doomed Planet”, on our “One Foot in Hell” album. “The Planet of Doom” movie is one continuous tale broken up into 15 chapters, each interpreted by a different artist and musical band. It is an animated feature length film in which the hero, Halvar the brave, seeks vengeance aboard a witch-born chopper, journeying across a psychedelic landscape on a quest to defeat the deadly beast Mördvél for the slaying of his beloved bride. The art director and producer David Paul Seymour, and the animator and director Tim Granda, were long time fans of the band, and wanted to use “Doomed Planet”, during the closing credits of the movie. Fortunately for us one of the other bands in the movie had to drop out, so we were offered the opportunity to write an original composition for the movie. This song, “Witch’s Game”, was composed specifically for a segment in the movie where the hero of the movie “Halvar” enters a cave and encounters a witch who reads his tarot cards. During that reading he journeys into the cards, with some pretty trippy experiences! We are all very excited to work on this project, as we had never been involved in a motion picture soundtrack before, and we are eagerly awaiting the movie’s release, some time in 2021. You can follow its progress online.

And of course, now we have full-length Forever Black. Did any one person do the bulk of the writing for Forever Black, or was it more of a group effort? And did that approach differ from the band’s early days?

Rob: Not at all, the songs were written in much the same manner as before we broke up. We forge a song the same way a master craftsman creates a battle sword, adding the correct alloys to make the blade strong and true, then pounding these elements of molten metal to add strength and character, then quenching it in the blood of the unavenged!

Given the band’s name and all the Elric of Melniboné cover art, it seems safe to say that classic fantasy literature is an inspiration for the band. Are there any literature-inspired songs on Forever Black?

Rob: “The Frost Monstreme” & “The Fire Devine” hark back to these early inspirations with “Legions Arise” being a call to arms, with the rest being the bands conjuring up of the darker side of man’s eternal struggle, “A Churning Maelstrom of Metal Chaos Descending!”

“Legions Arise”, “Before Tomorrow” and “Nightmare” are my personal favourite tracks so far. Do you have any particular favourites from the new album?

Rob: The album has some pretty consistent future “Cirith Ungol” classics. My favorite song is the one we haven’t written yet!

How do you think your musical tastes have changed over the years, and do you think that impacted on the album? Naturally Forever Black is very classic in its sound, but are there any more modern styles or artists that were an inspiration?

Rob: Many have compared us in the past or nowadays to other artists but we have tried as much to keep our music all our own. We certainly have influences and inspirations, but all this new music has sprung from just our depraved minds! Sometimes we reach back into our catalog for a hint of one thing or another but those are just thrown in as clues to puzzle hoping the initiated will gather them to unlock secret mysteries of the past!

What are your plans for the rest of the year? I assume COVID-19 has had some impact on touring in support of Forever Black?

Rob: We had a whole series of festivals and shows lined up for 2020 with most being cancelled or postponed. The hope is we come out of this nightmare all in one piece and stronger. If that happens, we will unfurl our banner and continue on our quest for metal domination!

And when you do tour, what’s it like? Do you all get on all of the time? Or do you have times you need space from each other?

Rob: The band has never been able to tour traditionally due to several band members other commitments, which limits our playing to just a handful of special appearances each year. Every show has been a new experience, some the experience of a lifetime!

Do you think it’s important for a band to be signed to a label to be recognized in today’s society?

Rob: No of course not, with the internet all you need is a connection, however to reach more people professionally, the record company will never go away. We are lucky to be on Metal Blade Records, a company that understands and supports the band. Brian Slagel who started the band was our friend from as soon as we released “Frost & Fire” in 1981, and we are proud to be on a label that has supported metal music during all that time.

Do you think image is important when being in a band?

Rob: Well of course but more important is the music. “Cirith Ungol” has a public image, one of dark maniacal necromancers, but onstage we are just a group of man beasts playing heavy metal! HA

How do you think the music industry differs today from when Cirith Ungol started?

Rob: Back then it was all about record label support and radio airplay above all. Now it is has widened out to the point, that it is mostly about the music, and that is a good thing. Lots of money was changing hands to make sure radio stations would play the music the people in charge wanted promoted. Now it is a whole different ballgame. I am sure that still goes on with top echelon of acts but we will never have to worry about that!

What are your views on bands who give away their music free on social media? Do you think this is a good beneficial marketing idea, or should fans be paying to purchase tracks?

Rob: Metal Blade Records posted our entire new album on YouTube for all to hear, and that is a good thing, but it is lower quality media and for promotion. The real fans will buy the music, to support the bands they like, and also to hear the higher quality digital or analog formats.

What advice would you give someone wanting to start a band?

Rob: Stay true to what you like, and that will make you happy. Dreams sometimes do come true!

Thank you for your time, is there anything you’d like to say to our readers?

Rob: I would like to thank you and all your readers for your interest in “Cirith Ungol”. Heed the call, “Join the Legion” and pick up our new album “Forever Black”! We hope to see you all, at one of our rare live appearances soon! 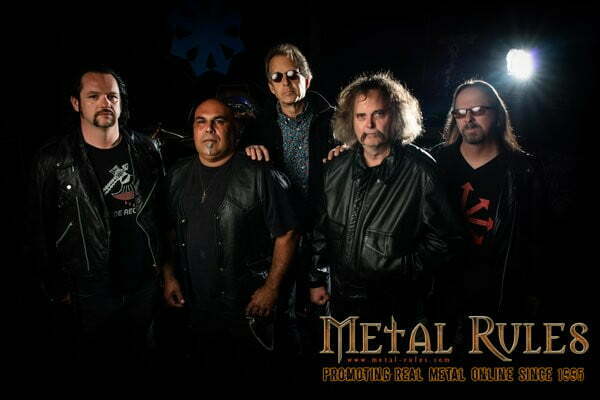