The Legions of Cirith Ungol Needs No Introduction! Long May They Reign!

Interview With Robert Garven of Cirith Ungol By Keith Clement

Greetings from Metalheads Forever Magazine, I’m Keith, how are you today?

Rob: We are doing well, Thank you! We are very excited over the release of our first new album in many years “Forever Black” on Metal Blade Records!

Forever Black is scheduled to be released on April 24th, 2020, can you tell me about the writing process and production?

Rob: We it started seriously writing new material for what would become “Forever Black” in the summer 2018. Our hope was always to release a new album, but we never thought that it would become a reality. Then we saw all the positive responses to our single, “Witch’s Game”, which came out in September 2018. We started recording the album in the summer of 2019, and it was finished by the end of the year! All the material is new, and we recorded it our good friend Armand, from “Night Demon”, studio, The Captains Quarters, here in Ventura California. Of course, the recording process has changed much, but it was a very rewarding learning experience!

What is the concept behind the album Forever Black?

Rob: The concept was based on one of Tim’s epic dystopian songs, “Forever Black”, and reflects a continuing dark and doom filled theme of the band’s repertoire, conjuring up imagery of the darker side of man’s internal struggle “A Churning Maelstrom of Metal Chaos Descending!”

This is the first full length studio album since 1991 release of Paradise Lost, can you tell me how it is to be back again making music?

Rob: It is truly amazing. We never thought that we would ever play again, let alone be releasing our 5th studio album. When the band got back together it was really only thought to be for a few shows, but soon we realized how much we missed playing, writing and performing heavy music! And so the saga continues…

The album art looks amazing, what is the concept behind it?

Rob: The fantastic painting chosen for the cover, “Elric in Exile”, perfectly reflects the dark and brooding mood of this album perfectly. It is another masterpiece by the world-renowned Michael Whelan, and we are honored to have his work gracing another one of our album covers.

I enjoyed each song from Forever Black, each song sounds amazing, thanks for giving us classic metal again, what is the song that is so special for you guys from this album?

Rob: Well, that would be hard to answer, as everyone in the band has their favorites. One of my personal ones is “Legions Arise”, I wrote the lyrics to be part two of “Join the Legion”, and wanted a song that had a tempo similar to our song “Blood & Iron”, off our third album “One Foot in Hell”. It is a great album opener, after Jimmy’s otherworldly “The Call”, and a bit more upbeat than the rest of the selections.

A band from the early 70’s how has the journey been for you?

Rob: It has been an amazing roller coaster ride with many highs and lows, it just seems like yesterday, when we first started playing. So much has changed over the years, but much has stayed the same, and that is, the desire to appreciate and play, what we consider true epic metal!

What would be some of the golden memories for the band?

Rob: There are so many memories from the past, but they are blurred compared to the memories we have from the last few years; playing to packed houses and large festivals, our first show ever in Europe, our first single, then our live album, “I’m Alive”, and now “Forever Black”, has to be the pinnacle.

During this situation of Covid 19, It would not be possible to tour, what are the plans you have at the moment?

Rob: We are all taking a short break, this is truly the day “Before Tomorrow”, and when this passes, we intend to come back stronger than ever.

Just like the Dragon, you have raised from your silence with an album which is pure Cirith Ungol, how as a band you feel about the comeback, do you feel it’s worth a great comeback for the fans in your kingdom?

Rob: We felt like we had unfinished business, so when we had the chance to reform, we realized that there was new generation of metalheads that could appreciate our very unique style of metal. And after our slumber we considered it our duty to bring forth the power of Ungol for all to behold! We tried to make the heaviest album possible, and I will let your readers decide if we succeeded!

What would you like to tell your fans around the world?

Rob: Heed the call, and “Join the Legion”! Together we will drive the cringing herd of false metal before us, and we will all join together, “In World Metal Domination”!!

Thanks for your time, long may you reign Cirith Ungol. Cheers!

Rob: Thank you, and all your readers at Metalheads Forever, for keeping the flame of true metal burning! Hoist it high for all to see!! These are trying times filled with darkness and doom, we will continue to be by your side in the upcoming battle! 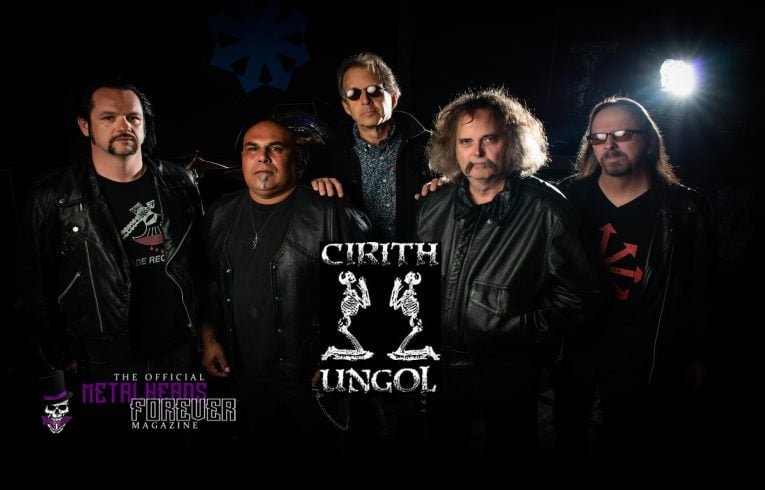