Recorded in November 2011, written by Perry Grayson. It is currently the band’s latest tune. The song was originally performed live by the band Moonshine, a short lived Aussie band with Perry.

We recorded basic tracks for 3 songs in LA in Nov. 2011 on 8-track analog cassette. Vocal and lead guitar overdubs were laid down in Sydney. This is the first finished of the triad, “Murder in Blue.” Dedicated to the memory of Elizabeth Short (1924-1947). Just click on the link below…

(not working? see the sound Murder in Blue)

Elizabeth Short (July 29, 1924 – January 14 or 15, 1947), known posthumously as the “Black Dahlia“, was an American woman who was found murdered in the Leimert Park neighborhood of Los Angeles, California. Her case became highly publicized due to the graphic nature of the crime, which included her corpse having been mutilated and bisected at the waist.

A native of Boston, Short spent her early life in Medford, Massachusetts and Florida before relocating to California, where her father lived. It is commonly held that Short was an aspiring actress, though she had no known acting credits or jobs during her time in Los Angeles. She would acquire the nickname of the Black Dahlia posthumously (after the owner of a drugstore in Long Beach, California told reporters that male customers had that name for her), as newspapers of the period often nicknamed particularly lurid crimes; the term may have originated from a film noir murder mystery, The Blue Dahlia, released in April 1946. After the discovery of her body on January 15, 1947, the Los Angeles Police Department began an extensive investigation that produced over 150 suspects, but yielded no arrests.

Short’s unsolved murder and the details surrounding it have had a lasting cultural intrigue, generating various theories and public speculation. Her life and death have been the basis of numerous books and films, and her murder is frequently cited as one of the most famous unsolved murders in American history, as well as one of the oldest unsolved cases in Los Angeles County. It has likewise been credited by historians as one of the first major crimes in post-World War II America to capture national attention. (Wikipedia)

Support the artists, buy records or merchandise of Elizabeth Black Dahlia 🛒
These links are automatic generated links and may not always give the best search result. Sometimes you might need to refine the search after having tried any of these links. Some are affiliates and some are not. If you know about any good deal for Murder in Blue, don't hesitate to add a link in the comment field or in the forum.
Categories:
0 0 votes
Article Rating
Subscribe
Connect withD
Login
Connect withD
0 Comments
Inline Feedbacks
View all comments 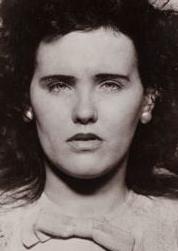