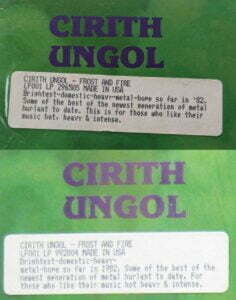 LP001 LP 296505 MADE IN USA
Brightest-domestic-heavy-metal-hope so far in ’82. Some of the best of newest generation of metal hurlant to date. This is for those who like their music hot, heavy & intense.

LP001 LP 992804 MADE IN USA
Brightest-domestic-heavy-metal-hope so far in 1982. Some of the best of newest generation of metal hurlant to date. For those who like their music hot heavy & intense.

CIRITH UNGOL Interview for Jose Luis Cano, Mexico:
GREG: We used to walk around neighborhoods knocking on doors and offering to wash peoples’ cars! The first 3000 copies of “Frost And Fire”, as well as the recording costs were totally paid for by the band.

CIRITH UNGOL INTERVIEW WITH GUARDIAN OF FATE METAL ZINE ITALY
GREG: We recorded it on 8 tracks at Goldmine Studios in Ventura, in the winter of 1980. We sold out of our first pressing of 3000 in a couple months, and there were around 20,000 copies sold in the year following its release.

GREG: Liquid Flames was our own label. We paid for all the studio time and all the manufacturing costs for the first 3000 copies of “F & F”. We sold all the copies within 3 months. After that, we signed a distribution deal with Enigma in the US. Over the years, we’ve sold at least 25,000 copies of “F & F”.

Support the artists, buy records or merchandise of Cirith Ungol Frost Fire 🛒
These links are automatic generated links and may not always give the best search result. Sometimes you might need to refine the search after having tried any of these links. Some are affiliates and some are not. If you know about any good deal for LP: (Liquid Flames Records; LF001), don't hesitate to add a link in the comment field or in the forum.
Categories:
0 0 votes
Article Rating
Subscribe
Connect withD
Login
Connect withD
0 Comments
Inline Feedbacks
View all comments
⭐
👁 Views: 149
🕜 December 21, 2021 🔁 December 27, 2022 📓 Write your own writings 💬 No Comments
Tweets by Cirith Ungol