BACK FROM SAMOA recording info/history:here is where the 14 tracks on Back From Samoa came from:

the only recording session with Jeff Dahl:

(1) “Marin County session” = Ballad of Jerry Curlan (the other 10+ songs recorded were a complete disaster, and all deemed unusable by gregg and todd)
none of those songs (save Curlan) have ever turned up on bootleg: the tapes disappeared (along with all other Back From Samoa multi-tracks) into the band’s 1981-82 manager Brian Izen’s vaults.

(2) MYSTIC craphole STUDIOS: Steak Knife, Lights Out, and They Saved Hitler’s Cock (and the other three Queer Pills 7″ep tracks) (Lights Out and a rough mix w/Tod vocal of Steak Knife are sent to Takeit! zine and issued on the DK’s nazi punks fuck off flexi-7″ep)

(3) PIHRANA STUDIOS: My Old Man’s A Fatso, Homo-Sexual, Haizman’s Brain Is Calling
7 of the album’s 14 tracks have now been recorded (and four of them get lead vocals put on later into 1982 by me, per todd/gregg’s instruction)

at this point (the end of 1981) i officially “come back,” and after the two City Recorder songs have been mixed (at Cherokee on late night downtime), buy out Brian Izen with a $7,000 check roughly matching his recording/mixing/mixing/mixing costs of the above three sessions (dunno if a check for the City Recorders 2-song 5-hour session w/vocals was paid by brian or myself)

(4) CITY RECORDERS: Gas Chamber, Not of This Earth (i’m there, and put the vocals on the minute the tracks are quickly cut)

(5) QUAD-TECH: Time Has Come Today, Coffin Case, and re-recordings (since the Marin/Mystic/Mystic tracks are deemed “shitty sounding” which is correct) of Tuna Taco, You Stupid Jerk, and The Todd Killings.

i was never in the same room as the Marin tapes (cut with jeff); Tuna Taco (w/todd on lead vocals) was the only track that MIGHT have been mixed along with Ballad of Jerry Curlan, but gregg went out to Marin to supervise that himself.

turner has babbled gibberish (over the last 25 years since he was put on anti-depressant meds…that’s a lot of Prozac) about everything related to the band since he disappeared from California in 1993. but Todd, PJ, and Billy have clear memories and can easily verify/recall the songs above matched to the studios — the audio itself quite clearly identifies Shithole-A from Shithole-B and C and D and E.

UK bootleg on Shakin' Street label, none of it authorized. not recommended unless it's crazy cheap, basically not worth the vinyl it's pressed on.

Support the artists, buy records or merchandise of Angry Samoans 🛒
These links are automatic generated links and may not always give the best search result. Sometimes you might need to refine the search after having tried any of these links. Some are affiliates and some are not. If you know about any good deal for Return To Samoa (Out-Takes/Lost Tapes), don't hesitate to add a link in the comment field or in the forum.
Categories:
0 0 votes
Article Rating
Subscribe
Connect withD
Login
Connect withD
0 Comments
Inline Feedbacks
View all comments 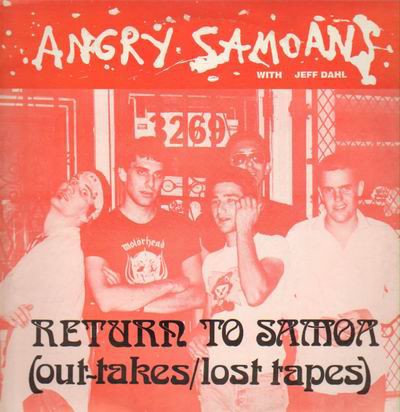