A cover by Static Laughter taken from their Rock’n’Roll Terrorists (2001) demo. I personally want to hear all of the Static Laughter. A re-master will soon be released – I hope.

Rudolf: It was in the late 90s when I was about 18 years old that I discovered Cirith Ungol. In 2000 I bought their record „Frost and Fire“, and it became one of my absolute and all-time favourites, to be exact: my favourite traditional metal album ever. The brillant songwriting, the mix of nostalgic 70s mood and raw aggression… simply incredible!

Why did you choose to cover Frost and Fire?

Rudolf: And yes, Frost and Fire was the great hit on the album, I always sang along the lyrics and then tried, more or less succesfully, to play it on guitar myself and showed it to the band, and, well … we recorded it in our own raw Black/Thrash/Punk style.

And why exactly Frost and Fire?

Rudolf: There were other hits (only hits on that album), but that song fit the best into the raw and aggressive mood of our own material. Honestly, the other albums found their way to me much later. So this one remains my favourite and also a great memory of my youth.

Have you been doing a live version of Frost and Fire?

Rudolf: We had several gigs, but I am not sure whether we also had that song in our setlist.

Have you played other songs by Cirith Ungol?

Rudolf: If I remember correctly, we once talked about “Edge of a Knife” at a rehearsal and tried a little, but did not really work on it.

Can you tell me the biography of Static Laughter from 2000s until now?

Rudolf: Static Laughter were founded in 1999 or 2000 by Ruhk aka Rudolf (vox and guitar), Horn (bass) and Drave (drums). Rudolf had played in a raw Black Metal band Kriegsschwur before, the others did not have metal experiences. The beginning of Static Laughter was a mix of Black Metal and Doom with depressive lyrics, then we took into a lot of Thrash, Rock and Punk influences (The Exploited, Motörhead, Hellhammer, Mentors) and the lyrics changed to some very weird humour. Two demos („War, Death and Beer“ and „Rock‘n’Roll Terrorists“) were recorded, which were spread only among friends (the second even without a real cover). The band existed some more years with (except for Rudolf) changing members and then fell into sleep. There sometimes was the idea to record the old songs again with friends, but then… well, I fear I’m too old for songs like „Graveyard Gangbang“, „G.enocide Spot Boogie“ or „Wheelchair Warrior“ now.

There is, however a new metal project of Rudolf now, it is named Cult of Winter. Just some raw and simple Old School BM. Some tracks can be found on YT. His main project now is Sonnenkind, which is some mystic Folk/Neofolk, far from metal music. Thanks a lot for your interest!

It had no real cover. Though I have a rerelease in mind with a nice drawing. Let’s see.

I ordered someone to redraw the logo as the quality I had was too bad, but I did not get the result until now. I wanted to get this before uploading the stuff. Ideally also remaster, but looks this can’t happen the next time.

Support the artists, buy records or merchandise of static laughter 🛒
These links are automatic generated links and may not always give the best search result. Sometimes you might need to refine the search after having tried any of these links. Some are affiliates and some are not. If you know about any good deal for Frost and Fire, don't hesitate to add a link in the comment field or in the forum.
Categories:
0 0 votes
Article Rating
Subscribe
Connect withD
Login
Connect withD
0 Comments
Inline Feedbacks
View all comments 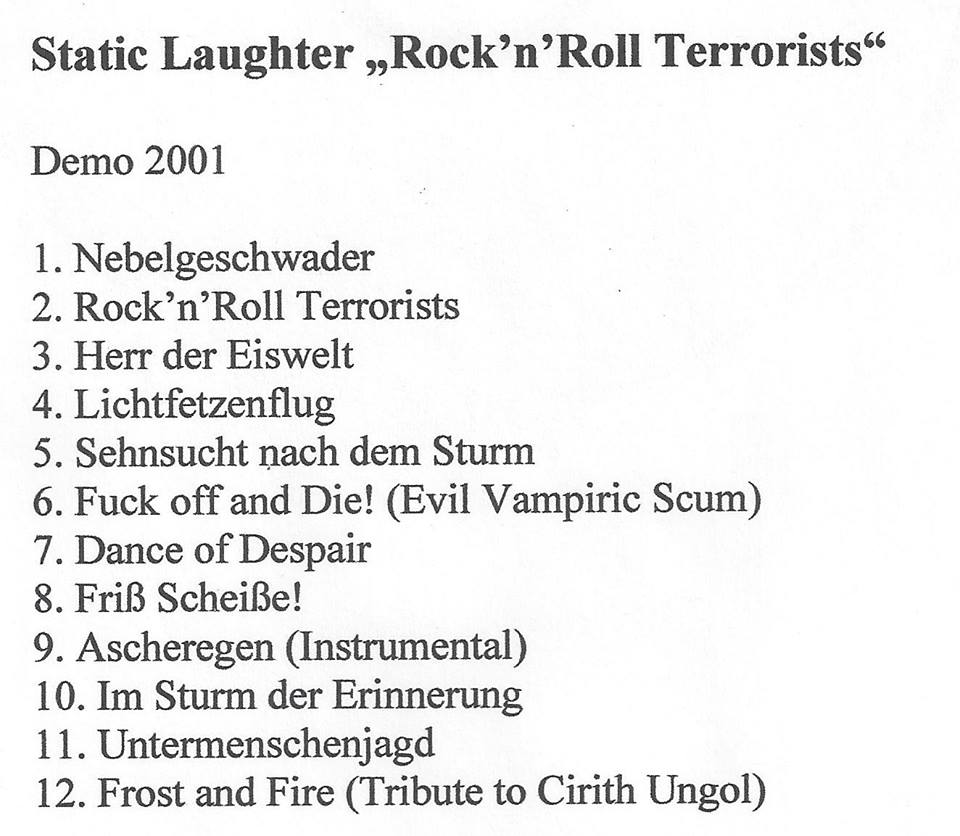