This song exists only as a fragment. Perhaps I taped over the original and it is lost forever. Or perhaps a complete version is on another tape, still missing. I remember recording three  Cirith Ungol songs: “Better Off Dead,” “I’m Alive,” and “Edge of a Knife.” Only this fragment remains so far. Also missing are versions of Manilla Road’s “Crystal Logic” and Nigro Mantia’s “Death Romance” and “Monolith of Infinity.”

I recorded that song many, many years ago on a 4-track cassette recorder.
I’ve been a fan of Cirith Ungol since “King of the Dead” was released. They were and still are one of my favorite heavy metal bands. Though I never knew any of the members personally, I wrote to the band once, back then, and they sent me a photo and stickers. Why “Better Off Dead”? I don’t really know. It’s a great song, and I think I really saw myself in the lyrics, especially many of the lyrics on the “Frost and Fire” record. It was also fun to play that bass riff!
“Paleontology” is an Internet-only release. The music is from old cassettes that I found, and I wanted to share the music with everyone. I used to record many covers back then, for fun. Maybe one day I will find the tapes with the other two Cirith Ungol songs.

The lost two Ungol songs, Edge of a Knife and I’m Alive, and the full Better Off Dead, have finally surfaced!

These next songs are all from a tape Steve recently found in storage. It’s not the same tape as with the songs above, although the mixes may be the same in some cases. I believe this tape is a copy of a lost master. The multi-track tapes are long gone!

I played bass guitar, guitar, and programmed the drum machine for these cover songs. I remember the Roland 505 being a real bear to program, and it took me hours and hours to get the drums even close. To this day, Cirith Ungol’s “Frost and Fire” is one of my favorite records. I wonder what they would have done had they continued in this direction.

I wanted to record the vocals, and I remember trying…but then I thought, “How the hell am I going to do this? I can’t even fake it! Who can sing like Tim?” So I left the songs without vocals. I also recorded “Maybe That’s Why,” but that tape was eaten in an ’82 Chevette’s cassette deck long ago.

A new release for Revelation is now available named Paleontology. These songs are from the earliest days of Bert and John playing covers to John’s 4-track home recordings of Revelation demos, all from 1983-1992. Everything is available, as are all Bland Hand releases, for free download. 29. Jul 2007. 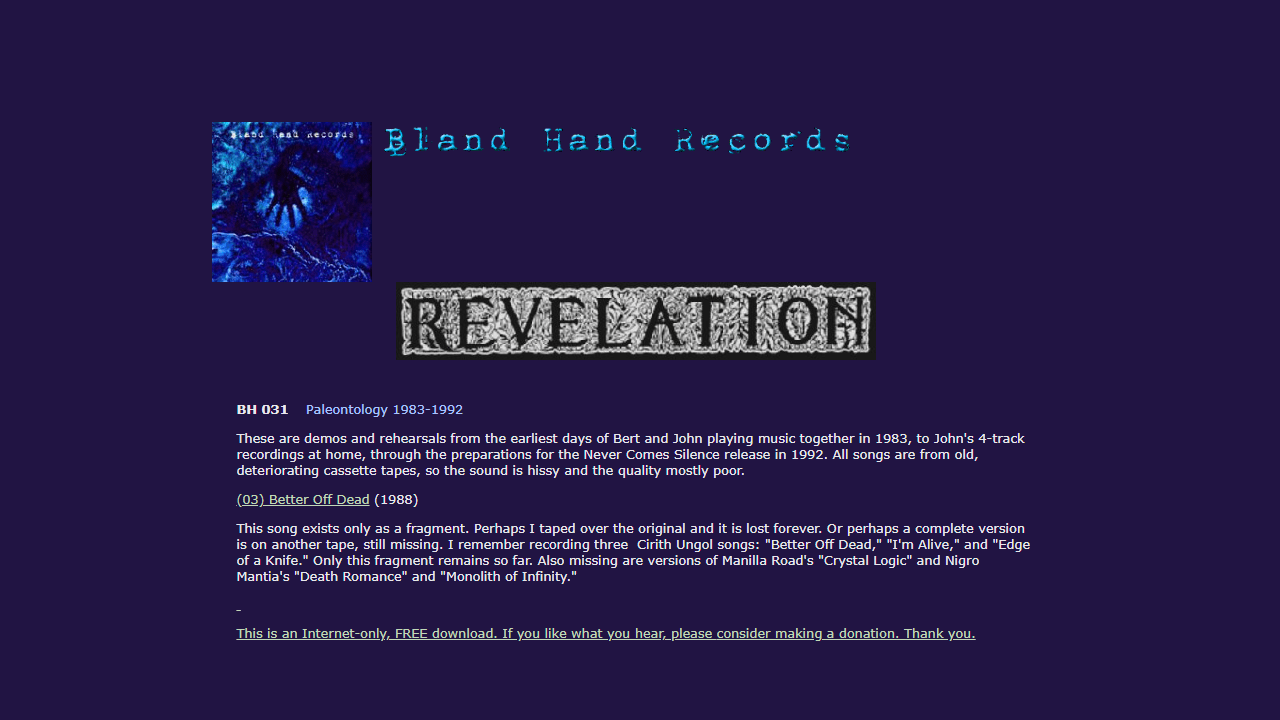