Here is a live cover of Cirith Ungol’s I’m Alive by the Greece metal band Convixion. It was recorded in Kyttaro, Athens, Greece on 20 Dec 2010. Unfortunately the sound quality is not great and the beginning is missing.

A short interview with Nick Papakostas, guitars and vocals, 22 Dec 2010

We do not have any personal relations to Cirith Ungol. We are just huge huge huge fans of their music.

Why did you choose to cover Cirith Ungol?

We used to jam some Cirith Ungol songs during our rehearsals. We played at Larissa city some weeks ago and we thought to give it a try. We played “Black Machine” and it went really well. Everyone’s comment were very encouraging.

And why exactly I’m Alive?

Because it is one of the best songs ever written and one of our favorites. He hadn’t told anyone that we were going to cover I’m Alive. It was a big surprise for all.

You do not have to know the story behind the lyrics. Each one of us had in his life one, two or many dark times… This song reflects our feelings in times like these. It gives us a way to express emotions. But the true power of the song is in the end. The last two lines are the ones that give you strenght to hold and move on… Great great great song. Fully emotional…

Will this cover be released on any record?

It wasn’t recorded. Only what you saw on youtube, so no!

Any plans for a studio cover version?

Not for the moment! I think that a song like this cannot be re-recorded. It might lose its originality. The production of “Frost and Fire” is one of the elements that makes it so magical (even though for many people it isn’t “good”)
Nick and Convixion

Update: A studio version was finally released on the Alive Aftershock split EP in 2013.

Support the artists, buy records or merchandise of Convixion Alive Aftershock 🛒
These links are automatic generated links and may not always give the best search result. Sometimes you might need to refine the search after having tried any of these links. Some are affiliates and some are not. If you know about any good deal for I’m Alive, don't hesitate to add a link in the comment field or in the forum.
Categories:
0 0 votes
Article Rating
Subscribe
Connect withD
Login
Connect withD
0 Comments
Inline Feedbacks
View all comments 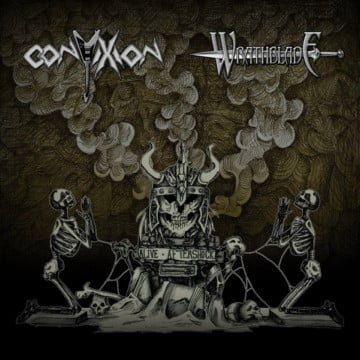