I asked Gunnar Hansen (vocals/guitars) if he could share some words about their cover. So here’s the story behind it, in the bands own words:

In 2003 before signing to Barbarian Wrath for my debut album “The Halo of Burning Wings”, Black Goat, the label owner approached me and wondered if I was interested in participating on a Cirith Ungol tribute album mostly made out by bands on the label as far as I know. Being a fan of Cirith Ungol and in particular King of the Dead which was an album that I had begun listening quite a bit to in the year or two before I started Faustcoven, I did not hesitate to take him up on the offer. I was trying to find a song that would translate well into my style, and while King of the Dead, Black Machine or Master of the Pit were obvious doomy candidates, the choice fell on Atomsmasher in the end. Having a more straight forward structure than the others, and a raw charm and energy that I felt I could work with, it was a good choice in retrospect. Then, never having released anything official at that time I wanted to make a rehearsal to see how it worked out, and improve on it for the final release. It turned out quite well I thought, although I wanted to get a bit more work done on the solo guitars and the drum programming. One interesting thing I did, which I guess is unusual for cover songs, was to combine two of the original riffs and slow them down, to make a new doomy midsection, intended as a sort of funeral march in honor of Cirith Ungol, and being based on Cirith Ungol riffs it is a pretty cool section. However the tribute release never happened, so I continued to focus on my own music, and put this recording into a shelf until the demo anthology was released in 2009, where I thought it would make a good bonus track. It’s rough around the edges and not something which I could honestly call a worthy tribute for the godly Cirith Ungol, but it has its charm and deserved to be heard as a part of the early Faustcoven history.

So where is this tribute album (not be confused with One Foot In Fire, which was released on Solemnity Music in 2006) Gunnar talked about? What happened to the project? Was any of the other recordings ever released or even recorded? I contacted Barbarian Wrath to get more information about this unreleased Cirith Ungol tribute album. Here is what he had to say about the project:

there were a few other songs “taken” by bands but FAUSTCOVEN, to my best knowledge anyways were the only ones to actually record a cover. Like many good ideas is just faded away with time.

Support the artists, buy records or merchandise of Faustcoven Priests Command 🛒
These links are automatic generated links and may not always give the best search result. Sometimes you might need to refine the search after having tried any of these links. Some are affiliates and some are not. If you know about any good deal for Atom Smasher, don't hesitate to add a link in the comment field or in the forum.
Categories:
0 0 votes
Article Rating
Subscribe
Connect withD
Login
Connect withD
0 Comments
Inline Feedbacks
View all comments 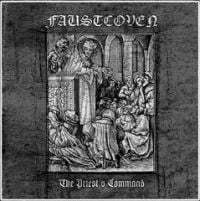