A band from Italy that has covered Cirith Ungol.

This Cirith Ungol cover was originally released on the second edition of the demo “Hatred and Warlust” (2003) and then later included on the One Foot in Fire tribute album. Line-up on this song:

Demo, private print. Originally released in 2002. Re-released with Cirith Ungol-cover as additional track in 2003. It’s out of print! Click here for more info about the cover.

I always had a great interest about obscure and hidden bands from the States I like Cirith Ungol.

Doing a cover was intended to let now to others this underrated band.
I think that Holy Martyr are really different with the approach and the sound.
Frost And Fire was the best choice to put more speed and power, obtaining something similar to Holy Martyr.

Additional liner notes are to be found in the booklet for the One Foot In Fire tribute album.

Support the artists, buy records or merchandise of Holy Martyr Hatred Warlust 🛒
These links are automatic generated links and may not always give the best search result. Sometimes you might need to refine the search after having tried any of these links. Some are affiliates and some are not. If you know about any good deal for Frost and Fire, don't hesitate to add a link in the comment field or in the forum.
Categories:
0 0 votes
Article Rating
Subscribe
Connect withD
Login
Connect withD
0 Comments
Inline Feedbacks
View all comments 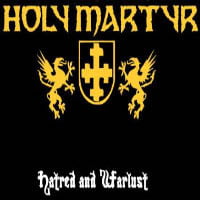