Moving toward the evil song that fate will sadly sing.
How the pride of man has fallen, crowning lust their only king
Heaven screams in anguish and the world cries out in pain.
Unleash the final terror- man begins his now doomed reign.

False prophets spread their cursed rule across the poisoned land,
Why must we always choose to put our fate in reckless hands?
Fingers poised on Armageddon, dare they make the fatal move,
And send this dying planet hurling headlong to the tomb.

Broken leaders mark the twisted path that mankind chose.
Final judgement is upon us, vengeance rains its fearful blows.
So we hurl our prayers toward heaven, surely they will heed the call –
But soulless skies just echo with the screams of mankind s fall.

This is from the same session as above. Once again this song stands head and shoulders above the version on ‘Paradise Lost’, as we had no artistic control on that album at all. The intro, ending and gnarly panned guitars were my idea!

These tracks were done on a Teac 3340 4-track deck and originally had better lead and background vocals, which are missing now. To the best of my recollection we erased the vocals and recorded only Tim’s leads for practice for this album that could have been our best if we had not been screwed on the whole thing. I thought I had thrown them away when the band broke up in despair, they are presented here for your enjoyment. I know this is on this disc twice but I did not want to break up the original trio. This is the mighty Flint playing Bass and Jimmy playing the amazing leads.

Support the artists, buy records or merchandise of cirith ungol paradise lost 🛒
These links are automatic generated links and may not always give the best search result. Sometimes you might need to refine the search after having tried any of these links. Some are affiliates and some are not. If you know about any good deal for Fallen Idols, don't hesitate to add a link in the comment field or in the forum.
Categories:
0 0 votes
Article Rating
Subscribe
Connect withD
Login
Connect withD
0 Comments
Inline Feedbacks
View all comments 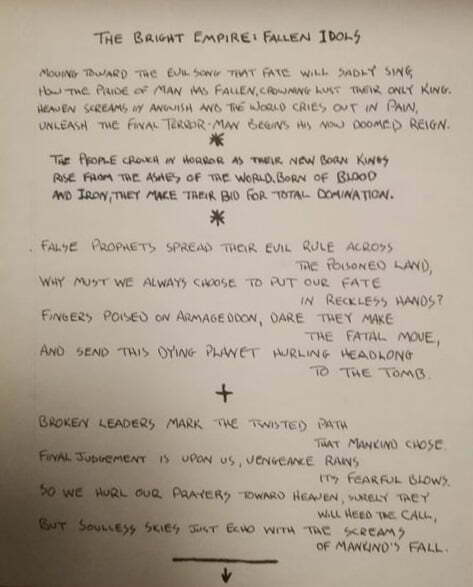